An other FO. The yoga wrap.

This was a summerlong project, and it means change for me. I started it on my way to the carrier training where I met that HR person who was behind the idea of me for this job I have now. I finished the knitting on my last day in the call center. After it was blocked and the sleeves sewn in... here it is: 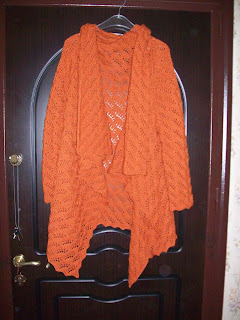 And here are some modeled pictures, that were taken in the cafee at last week's of knitting club. Thank you Nicole for sending them to me. I cut my head of because I look awful, but that is my fault not anybody else's... 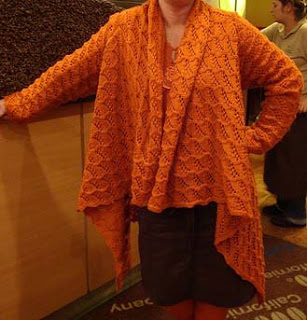 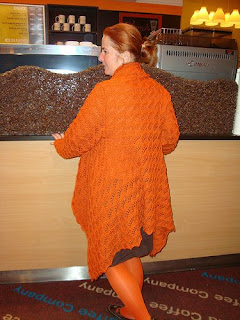 OK, this is ready, but I am not happy with it. I have done about a dozen pictures, but maybe because it feels my unhappiness it refused to come out on the pictures.
The color was way off than the pic showed, then it knitted up even worst. 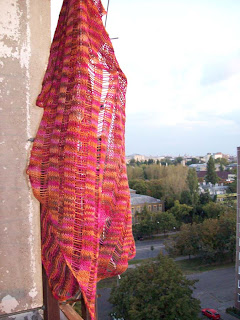 It striped up OK, but it bleed like hell. I tried to soak it in vinegar, but today I tried to wore it and the color rubbed of on the collar of my cream jacket. YUCK. 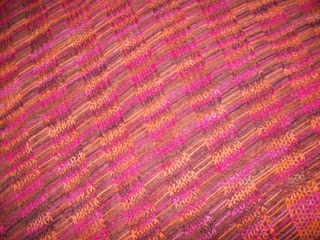 The pattern is fun, and I will definitely knit it again, from a different yarn. 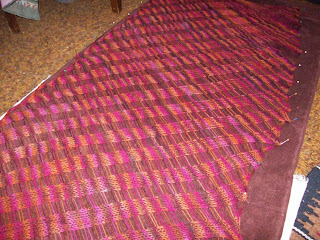 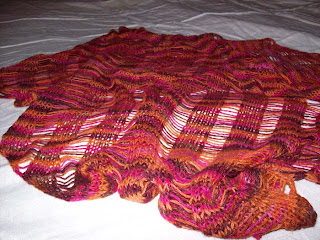 Where is my knitting mojo?

I used to knit so carelessly, and most of my stuff turned out rather well, and the way how little yarns I had left over was almost famous... now I run out of yarn and had to rip back a repeat from the Adamas shawl. But that wasn't that bad. Now this clapotis is a complete mess. The yarn was bleeding, and it was just not enough. Even though I started with two repeat less at the increasing rows, I didn't had enough to make twelve at the straight ones and decrease all the way. I frogged back one, and it still was not enough, so I frogged the whole thing back... By now I almost hate that bloody (umm bleeding) yarn. I am stubborn enough to do that clap once more but I sure will not love to wear it... the colors would probably would go well for my friend (who received the Hungarian socks back in the spring with such a grace)... and I already ordered some other yarn from the company I got the yarn for the Adamas.
Then I realized I made a mistake with the Dahlia too. I wanted to decrease it a bit to have somewhat more fitted waistline, but I haven't realized that the bodice part should be longer than I thought. If I decrease it this rate it would be way to tight. So I have to frog it back too...
I have no idea what is up with me. I keep frogging things back.
So I am either cursed, or just simply lost my knitting mojo, or... could I have become more of a perfectionist? That I wouldn't go things pass by and I would rather rip back and fix it?
That still wouldn't explain the bloody bleeding yarn that turned out so much not as I imagined from the skein...

The good news is that the yarn I ordered from ebay and was starting to get worried about it has arrived today, and I love it, and I am pretty sure it wants to become the cable down raglan sweater. Now I have to see how can I get hold of the pattern...
Posted by peony at 9:53 PM 1 comment:

I had my shares of dealing with bleeding fabric, but never with bleeding yarn
I am knitting the clapotis I just did the tenth repeat of the straight rows. I am using this hand dyed cashmere/alpaca yarn The color has more pink and dark purplish red , and as soft as it is, it is bleeding!!! I have two stripes on my left index fingers, and on my right hand all the tips are dark pink!!! II will have to soak it to block it, and i was wondering if I can do anything to stop the bleeding. I mean if the color transferred to my fingers, what will it do to my neck? Or if I wear it over a white shirt? Anyway, do you think putting some vinegar in the soaking water could help? Salt? (I can't get MORTON salt here) What else can I do? DUH. And I thought I am doing so well with that clappie...
Posted by peony at 11:45 AM 3 comments:

For the longest time I thought about the Clapotis... OK, it is a rather simple but fun pattern.BUT everyone is knitting it, so why should I? Since Nokia phones are the most popular cell phones here, I will not get one...
But then looking around, listening to podcasts, reading blogs I realized they are like a knitter's badge. The pattern is so popular, that most probably every knitter who gets online at least once in a while knows it. I heard reports from places like Stitches Clapotis were showing up at every turn. If someone wears it it means it is hand knitted, that the person wearing it is a knitter (or in a gift-relation to someone who knits).
Since I live in a country where knitting is still considered a weird past time, it is not very probable, that someone will approach me with "OMG, is that a Clapotis?" (Nor will the same question will be asked for Noro yarn, unfortunately), still I finally gave in and ordered the yarn and started a Clapotis.
This is how far I got with it in about two hours on late Tuesday night: 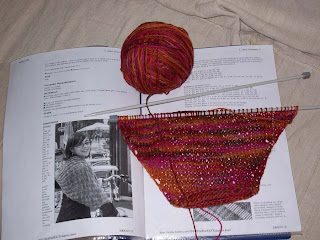 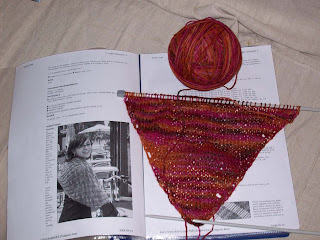 That was with frogging the first ten or so rows twice. Once because I decided I want something lighter, so I went up with the needle size, then... I learned to knit with slipping the last stitch and knitting th efirst one, no matter what happens afterwards. The clapotis pattern calls for knitting or purling into the front and back to the last stitch and sliiping the first one. I could do it, but after doing ten rows twice like that I realized it will be a pain in the ass for me. NOT because anything is wrong with the pattern, but because I am so much used to knitting some other way. So I was thinking how can achieve the same effect with how I feel comfortable enough to knit. So I decided to slip the last stitch and knit into the back and front of the first one of each row for the increase part, ktog for the first two on the right side and knit into the front and back of the first stitch on the ws. Up until now it works just fine. And even though I could only knit a few row at each night, this is how far I got with it today: 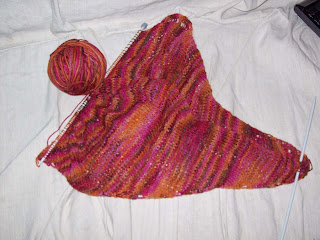 I don't even realize how fast. Christopher is in school and I am in my new job for the third week... Still have not really got into a new routine. I miss having some free mornings, and I have considerably less knitting time.

Thank god for the renewed weekly meetings of the knitting club, otherwise I would really loose it. Not that there is much knitting to report of. I still haven't managed to get a modelled picture of the shrug, but I already wore it and I have been told it is cute.
I also managed to block the yoga wrap on the carpet of the living room. It took up every inch of free floor space... 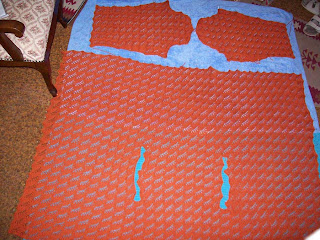 And I started the sweater Dahlia from knitty.com
I got this far with it: 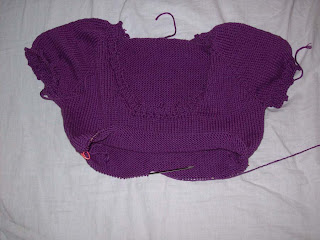 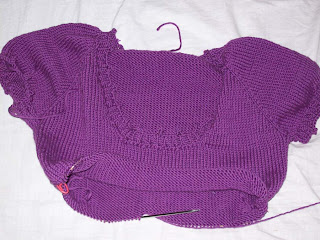 I have to admit the Addi needles are really different, I can almost forget how much I dislike using circular needles.
Posted by peony at 8:43 PM 1 comment:

In the midst of chaos

The only thing kept me sane is to steal some time for knitting a row of here and then...
I proudly present my Golden Adamas:
Before blocking: 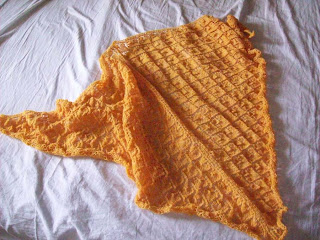 From a bit closer. See how the edges are rolling? 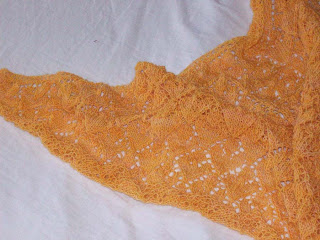 Being blocked on the bed. The weather was so hot it dried within a couple of hours: 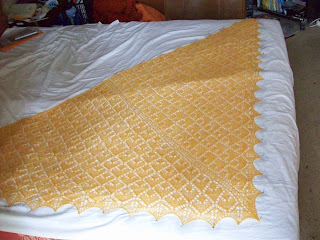 Close up of the pattern: 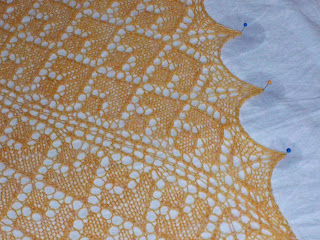 I couldn't do a modelled picture alone, so I hanged on to the entrance door: 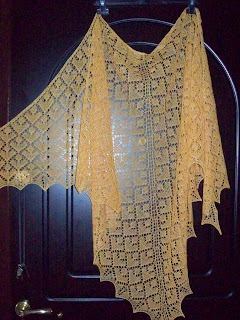 Though I already did my share of lacy knitting, this was my first "real" lace shawl. The pattern is called Adamas Shawl, and by Miriam L. Felton. I see now why lace knitting is so addictive. I loved making this, and even though I knew about this I was still amazed how far 100 grams of lace yarn can go. By the way the yarn was a 100 grams, 950 yards of this yarn.

The first day of shcool

My baby is not anymore...baby that is...here are picture from his first day at scool...
We stopped at the entrance of the church: 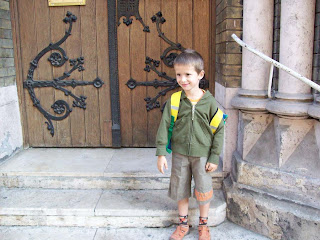 His school bag is sooo big (and heavy): 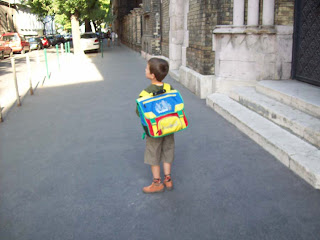 At the gate of the shcool: 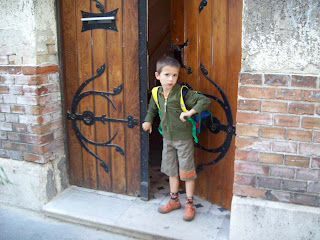 Sorry for being off for some time. Life is getting chaotic.
Christopher started school today, and I also started in my new job.
The new job threw off all my plans to take a vacation and stay home for these weeks, and arrange things that should be arranged. P. was finally forced to do some things about Chris's room, and the rest. Everything iy in chaos, I cannot concentrate on even getting everything toogether... I keep apologizing for my disorganization, but for the moment the teachers seems to be understanding.
As for work.. I do not no yet. Need a bit more time to see things (and I can't even think when will I see them clearly...).
Keep fingers crossed.
Posted by peony at 8:39 PM 3 comments: