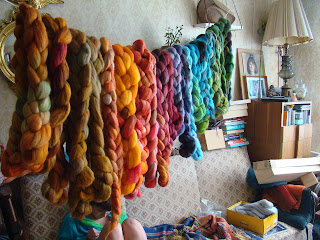 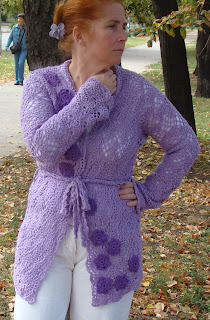 The idea came from a german crochet magazin, but even in hungarian I can only make sense of a crochet pattern if there are charts to go with them, in german I am totally hopeless. Besides, the  more I looked the more mods I decided. 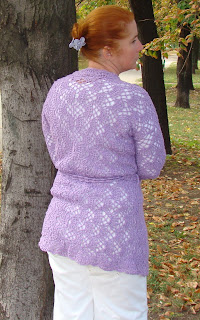 In the original pattern there is a square crocheted from one side to the other. The pattern has a strong direction, so for simmetry I started it in the middle and crocheted outwards. The same for the fronts. Then, after sewing it up I kept crocheting the front and continue around the neck for a narrow collar. 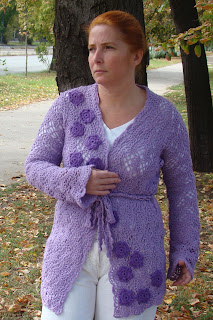 I wanted the sleeves slightly trumpet shaped so at the end insted of seven I did eight, then nine ouble ctovhet in each pattern repeat.﻿ 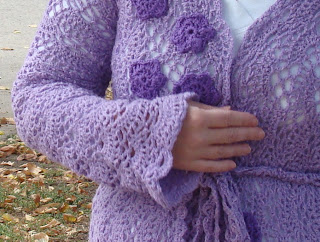 I made the decoration flowers from th etop of my head and sewed them on irregular places, like they just fell. 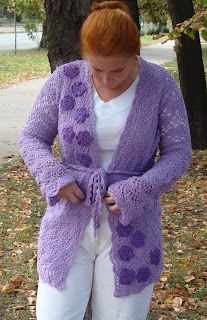 The yarn was a second hand find, cotton/rayon/acrylic mix, unevenly spun and plied.
Posted by peony at 8:50 PM No comments:

Years ago, when I started spinning we hunted the internet to find what and how. I remember trying to find a living person in my country who actually spins, I went to the Skanzen in Szentendre (a museum of folk buildings and crafts), where Saturday’s program was „spinning and weaving” but I only found a crumbly non-working spinning wheel, and a distaff packed with hemp. The weaving loom was in a room closed off with a chain, but that’s another story. Today it is easier, as much information is available in Hungarian as well, there are a few blogs, spinning wheels can be ordered, there even will be a book in Hungarian pretty soon. So, what to do when the urge to spin hits? 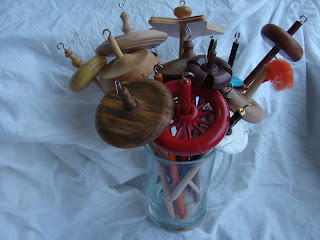 Start to look for info what kind of a tool can be used to make yarn out of some fibers… Every one heard about the Sleeping Beauty, so the first obvious choice is the spinning wheel. They can be found in flea markets, on second hand internet sites… I heard about successful buy, and/or successful restorations, but the truth to be told, I had no such a luck. My old wheels do work, they can be threadled, but they don’t really work well, and I am not too good in „barn tuning”, I even wanted to give up on spinning all together.

New wheels can be ordered…if we already decided that yes we do want to spin, in a long term, nota s a passing fancy, and we can finance the buy. Choosing the first wheel is not simple task either, but I am going to write about that later. BUT, the price of new wheels makes everyone consider very carefully if they really want to spin. THERE IS a solution.

The signs of the first spinning wheels were found in the Far East (not clear if it was China or India) in the 12-13th century. How yarn was spin until then? How was the yarn for spun for all those linen the mummies of Egypt were wrapped in? The Greek and roman togas? The textile for medieval clothes? The sail of Columbus?

With the hand spindle.

Our ancient ancestor realized if they sweep animal hairs off their skin or the floor of their cave they get twisted together, the fibers stick together, and gets a lot stronger than they were separately. At first yarn was spun by hand against their thighs, and only later they figured out that they can spin longer threads if it is wrapped on a piece of stick. These sticks must have been stuck in the ground when not in use to keep them out of the way, and then someone realized that the mud stuck on them actually helps them spin better, longer, faster, so some weight (firs a piece of rock, then some kind of a whorl) was intentionally put on the stick, and the drop spindle was born.

searching the internet you can see what is called „supported spindles”, these are either bigger and used to spin thicker yarns, or smaller, spin fast and can be used to spin really thin gossamer yarns, because gravitation is not pulling the fibers apart causing the yarn to break. (Picture from here, used with permission) 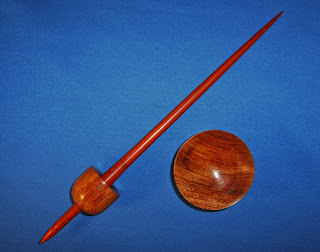 There is a spindle with a very interesting shape, where on the shaft two crossed bars form the whorls, this is the Turkish spindle. The bars can be pulled off the shaft and taken apart. This is great because the yarn can be winded around these bars, and when they are taken out we are left with a ready ball, and the spindle can be stored, shipped in a very small space.
Why use a drop spindle. Firstly, because this is the simplest, most ancient way to spin.


Why else? Because you don1t have to spend half/one/two/three month worth of wages on a wheel when we not even sure we really want to spin in a long term. The most important part of spinning, the „drafting”, which means pulling the fibers out of the roving or batt, can be practiced on t eh spindle the best. When spinning with the drop spindle the movement can be taken apart to steps (if you want to search on it: it is called the „park and draft method”), and you can concentrate on one thing at the time. A tool like this can be bought for a few dollars, or crafty persons can make one (or more) themselves from toy wheels old CDs, or stones found in shops. It is important thouhg that the spindle is the appropriate size and weight, properly balanced, therefore at the first time (to avoid unnecessary added frustration) it is worth to buy from a trusty source. they don’t cost that much, even if you add the international shipping cost, and a couple of types available in Hungary as well.

How to select a spindle? The big spinning goddess, Abby writes somewhere that theoretically you can spin any kind of yarn with any kind of spindle. I do suggest, at least in the beginning to select the appropriate tool for the job. 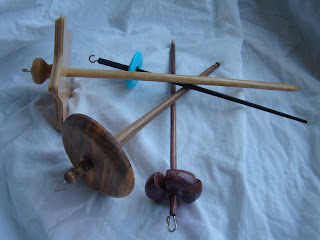 Basically, we select the spindle to what kind of yarn we plan to spin. Thick yarn is easier to spin in a bigger heavier spindle, for thin lace yarn a smaller, light spindle is better suited. Fr beginners i usually suggest a medium weight (1.5-2 oz) spindle. In my experience it is better if the whorl is not too big, about 6-7 cm in diameter. Of course this might be a question of personal preference, some might like the bigger better, I prefer the smaller ones, they spin better, faster, and lose their speed slower.  For plying I do have a lovely gigantic star shaped spindle though. 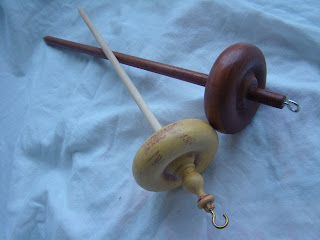 One spindle (or even a lot of spindles) fits into a much smaller space than a spinning wheel, which can be a definite advantage, if someone else also has a say what you put into your living space.


A spindle can be easily moved, transported, fits into a handbag, a smaller one even into a pocket. They can be easily picked up and a meter or two spun while doing a boring phone-call, one can easily walk over with it to a different room and spin while checking the kids progress on their homework, or they can even be used while walking (or dancing for that matter)

I will write later on the advantages of spinning wheel, next time I will come with what to spin into a yarn.
Posted by peony at 11:12 AM No comments: 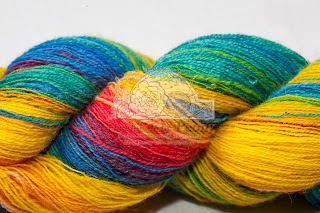 I was whining when after months of "I just don't have time" I wanted to sit down and spin without any particular aim. Not for someone else, not for demonstration, not for sale. Just for my own happines. 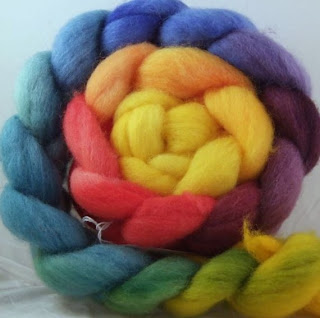 My friend Roni, looked me like I must have looked at Chris, when he came to me asking "mom, do we have something like a string? You know to tie something with"...
﻿ 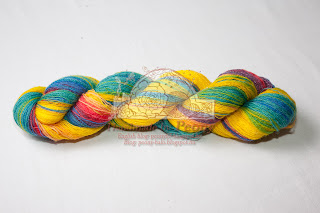 ... and led me by my hand to the drawer where I keep my colored fiber stash...The braids were flung around...ahhh thi sis too stripey I don't want stripe... The camel down, I want that with a supported spindle (yeah, i have to learn that first), this is too green, I want to spin green in the spring (don't ask), this is too orange, I've spun way too much orange lately...Then we got to the back of the drawer, to teh rainbow colored stuff... 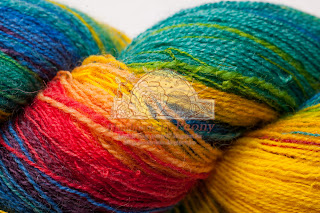 I never get tired of orange (how could I, it is on my head, in form of hair), and never et tired of shrugs. 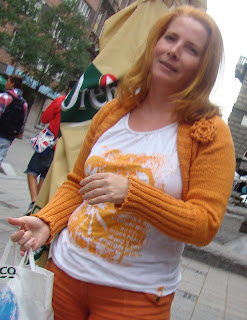 They are pretty, they are practical, they fit into a smaller bag too. They can be dressy, they can be sporty. 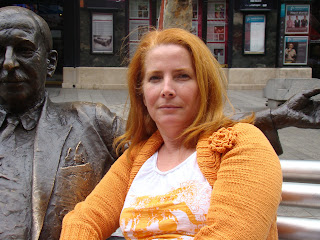 This was done almost a year ago, but somehow we never got around to make photos of it. 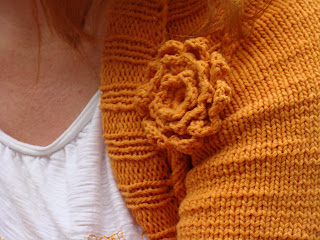 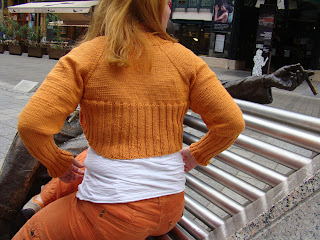 Yarn is "tengeri" from Barkafonal, made out of corn. Sadly it is discontinued... It was lovely and soft, though I've knit it a lot thighter than was recommended. 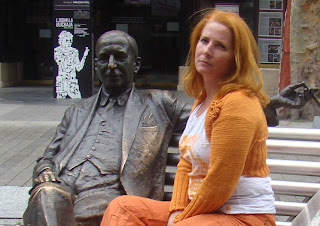 Photos by Christopher Laurent Deli.
Posted by peony at 10:45 PM No comments:

Weekly spinning: a year worth of fall 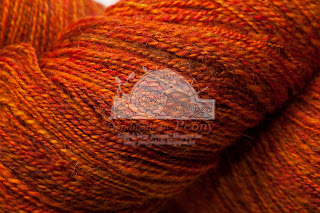 Which means I've spun this fall colored wool for many months.
It looked like this when I bought it: 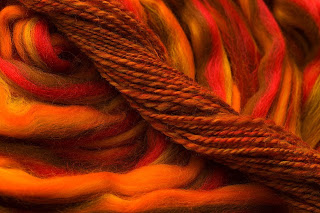 And for a year o so this was my spinning on the travel spindle. I took it with me on trains, on knitting meetings. I got way ahead with it when I spent two days spinning last august in the big craft fair.
My spindle lost its head in the meanwhile, took a while before I found someone to fix it for me. ﻿
﻿ 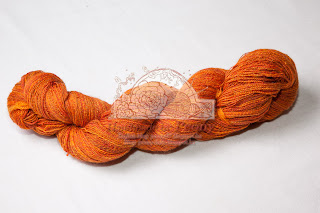 But at the end I finished it, but since I had 200 gramms of wool I kep some of it to spin thicker, but that was done on the wheel. 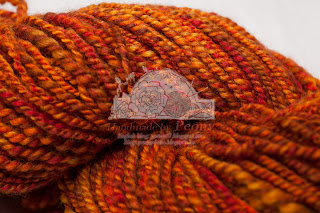 The lace weight turned out to be about 1200 gramms and 1000-1100 meters, two ply, spindle spun.
And I leave you with an other close up, just because I think all those colors are soooo pretty. 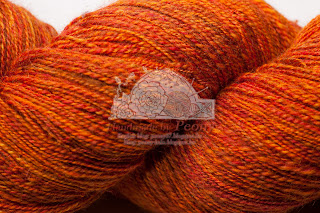 Photps by Tamás Rigó and Veronika Nyerges.
Posted by peony at 8:55 PM 1 comment: 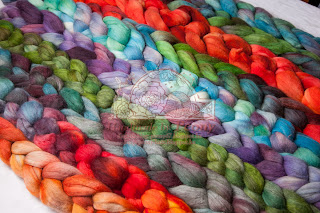 For the big craft festival I didn't prepare over a weekend, but through a long-long peiod. Between work, exams, translations, and what not, I was dyeing them little by little, by one, two, three braid/hank a time. There is a box at the corner of my living room which filled up, almost without noticing with colorful beauties. Slowly but surely I got used to having dyes up to my elbows, and cheer up my problem filled days with happy colors.
Then over the Folk Art Festival the box got emptied out.It was standing sadly without any content like an orphan in the corner. And I started to miss those colors around me, even the discreet vinegar smell wafting around my flat. And I kept getting enquieries, when will I have some wool again...
So I got my dyes out again, my pots, the mailmen brought fresh new fibers... and there was color again, rainbow drying on my balkony, we were skeining yarn again on the skeinwinder, and the box filled up again. 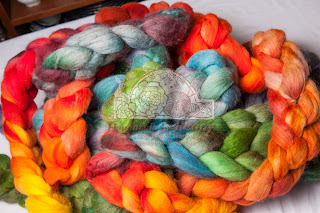 I can't use this all up, even if I spin 7/24, so lets find them owners who would like them as much as I do. Someone who would adapt them happily. Here you can find the handdyed wools for sale, here the handdyed yarns 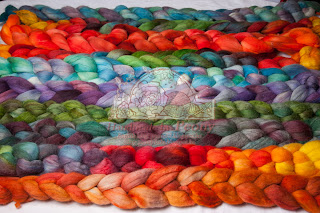 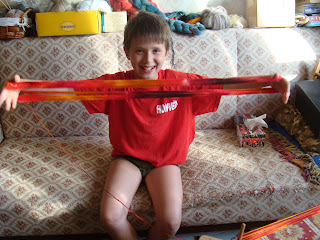