Until I decide what to do with this blog (isn't this a motif that keeps coming back? but the same thing is going for my life, I continiously trying to decide what to focus on, as I want to so so many different stuff)...

Most probably for the next while there will be a mixture of posts about travels (ten days in Italy, that were magical), crafts (clothes, kintting, yarn related) and probably stuff about reenactment and our group, the Mare Temporis Foundation, which sometimes referred as "the foundation" or "MTA" (from its Hungarian name)

I realized, that in the years I've mde most of my historical clothes I hardly blogged, and I never showed those dresses properly, saved maybe for the first, Tardis Blue ballgown, and the regency daywear. And I feel those dresses deserve their own posts. There was one general summary when I wrote about just how much material goes into an ensemble like that, but lets se some details. There will also be no particular order (not timewise, nor the order of their making, once I might make a summary page, and put them in order, but who knows, how and when).

Anyhow, first let's see my dress from 1845. This period, in Hungarian history was leading up to the 1848 revolution and freedom fight, and called the age of reforms. In English/American it is early Victorian.

This post was mainly inspired by a blogpost on wrap style 19th century dresses. The wrap / foldover style is a long time favorite of mine, I loved it long before I started doing historical dresses. I loved it for moderm clothes, tops, dresses, sweaters, cardigans... It suits me, and I love it. So I always looked for that style in historical clothes, however assimetry, as far as I can see, only pops up in the regency / napoleonic period.  This blogpost is a nice summary on how 19th century used this style and it also mentions the dress that inspired mine.

My inspiration was a dress is supposedly in the Moskau Historical Museum. 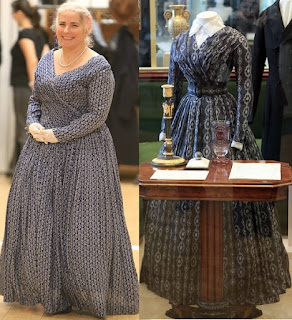 Guess what its blue, has small white patterning (two traits in a fabric I deraly love) and its foldover front enchanted me. 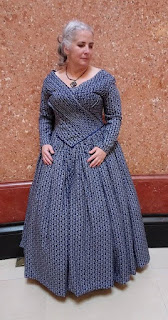 I made this dress after a first run with am early victorian dress the previous august, which is not a full succes, but still used when a somewhat lower class victorian character needs to be presented). I do not have many pictures of that dress, only these here, as I probably only wore it once, at the first Savaria Festival I attended. Since it was worn by Nori, who is more found of playing poor characters than I am. 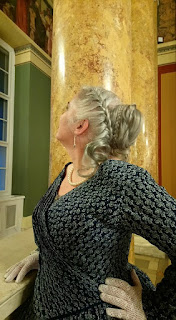 Sewviing the dress, my friend, Tilda helped me to pin up the folds. Which then promptly needed to be taken out, becaus ewhen I took of the the thing all the layers were off and warped. It took me days to rearrange and tack down those little pleats, but I am still ethernally greatful to Tilda for all her help, including the pinning up the final hem. 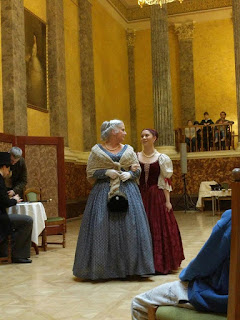 When I wear this dress I wear a chemise, bloomers (usually the same I wear for the somewhat earlier, regency period), a corset, a corded petticoat, a small bumpad, ruffled petticoats and a petticoat that should smooth doewn the lines of all that underwear. 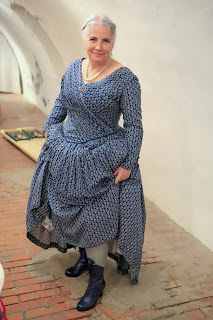 The block printed cotton fabric came all the way from india. The small white prints on indigo blue could fool anyone thinking it is a typical hungarian thing, but no. When I ordered it, I thought it will be a cotton, the typical thickness of the printed calicos, but it was much thinner, almost like what we call viscose flockon (the thin rayon). 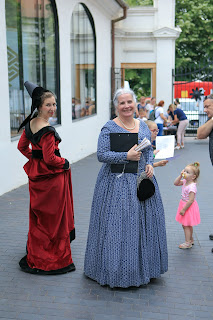 I lined the bodice with cotton and added boning to give it structure. 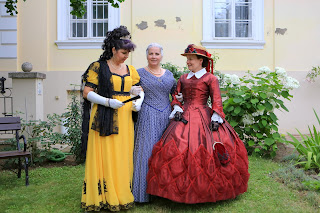 Searching back for some link, I ralized, that probably this is my most used dress, but rightly so. 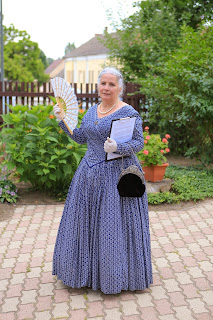 After all that wear I still love it, the details, the folds, the buttons, the narrow,, blue edging at the waist. 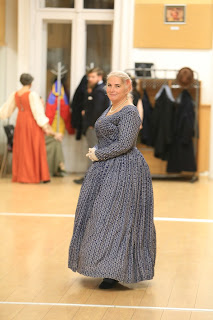 Not to mention the fact, that even though it is decidedly a day dress, not a ball gown, it moves nicely when dancing. 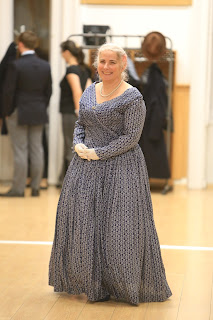 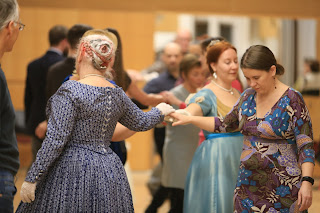 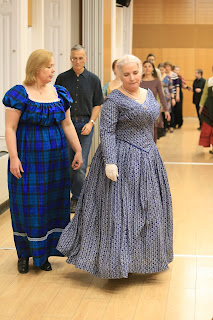 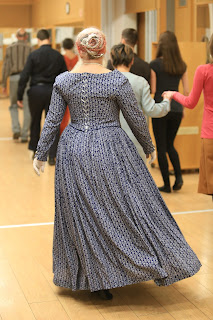 When you wow NOT to make an 18th century Ikea-dress, because everybody and their sisters has them, what do you bump into in a second hand store..... 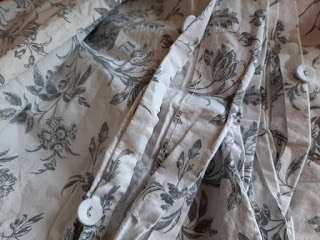 It has an ever so slight discoloration, I think I might just overdy it to light blue (what else?) But still....
Posted by peony at 3:43 PM No comments:

Is anybody still around here?

I know I keep saying this blog as a very random journal for myself, but then again...

Yeah, blogs are written to be read as well, isn't that so?

I also know that this partical blog is kep in rather haphasardly, sometimes there are a bunch of posts sometimes there are none for weeks....I admit that the absence of any kind of feedback (umm, comments???) makes it harder to keep up (or should I say, makes it easier to be lazy, and not put things up for longer period of time).

I also know people say that Ravelry / Intsagram/ Facebook and lately, increasingly youtube killed blogging, but I also know , that I, for one, like to read blogs...

So, I do have things to say, and pictures to show you, is anybody still here?