I decided that weekly spinning will mean, not that I show some spinning every week (though it may come to that... or it may not), but rather whatever I spun/ finished or just decided that I would show that given week.
Accordingly, here is a hank of yarn I spun for somebody's request.
This yarn is not "me", nor in terms of its colors, nor it being a kind of "art yarn", however, or maybe for this reason, I enjoyed spinning it. 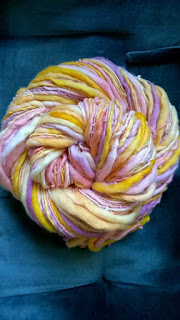 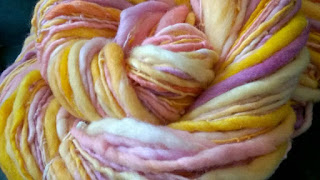 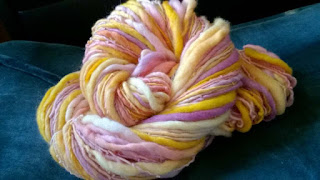 Yes, I know. April was a month where I seemed to dissapear. I keep saying this... so I will just trying to stop figure out where the month of April went, and show you something I made...
This time it is weaving...
I told you, weaving is something mystic for me, it is like whenever I sit down to a loom,, time, and space dissapears... Like I am in a totally different dimension...or universe...It is a strange feeling of being at two places, I am here, I think, I even talk, make a conversation, and at the same time I am sowhere else. It feels like it is not my feet that steps on the pedals, not my hands that throw the shuttles, but when I stand up, I do feel, that they were indeed my hands and foot.  I just see as the threads cross each other, and make order of things... Monotoniously repeated movements, step on the right foot, throw the shuttle from right to left, catch the shuttle with the left, step off the right foot, beat in, step on the left foot, throw the shuttle from left to right, catch the shuttle with the right handm step off the left foot, beat in, and start again. Even if I do not do any patterning, and/or stripes, as I put in the weft, one by one, it reminds me of life, day by day, it repeats certain elements, there is morning, there is daytime, there is night, without fail, No two days are alike, and no two weft is perfectly the same, even if we use commercial yarn, we use our hands, sometimes, I beat a lit stronger, sometimes I leave a slightly bigger triangle... I do strive to be as uniformly even as possible...but as with life...it will even out at the end. This is increasingly true when I use handddyed,  handspun yarn, when every weft I throw in makes me amazed, and wonder, because it is even less alike, and the end fabric is still relatively even... and when I have something to do? a pattern, or stripe, or just a line of silvery thread to break up the monotony? Like Sundays or holidays... when the days are just different... some life is totally irregular, and some patterns are just as irregular, like mine.. and sometimes I wish for more simple, more organized life, like in there scarf I wove last week, they are appearing at pretty regular intervalls... just like Sundays. 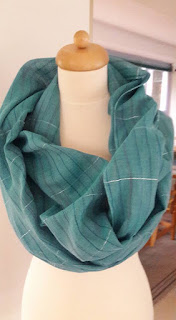 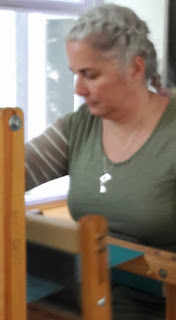 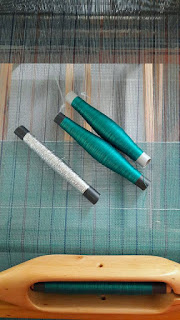 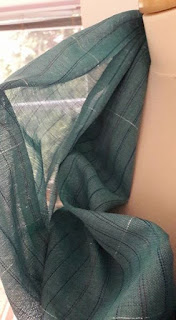 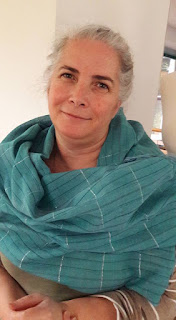 The shawls were made in Judit's workshop,
Yarn: 100% silk, from India, and some silver thread.
Photos: Judit Lukács
Posted by peony at 10:40 AM No comments: