An other summer knit finished in the fall. I practicly knited this twice. I saw a picture in a german magazine (Sandra, I think), which I liked pretty much. With all the white I wear in the summer, I could very well use a white cotton cardi. Now, my knowledge of the german language is rather limited, but I could still make out, that, it was made from the bttom up, in pieces. Now, if I ever saw a sweater begging for seamless construction, this was it, so I started it that way. I knitted it all up, thinking that I could block out the twist teh original lattice pattern produced. Hah, right. So I carefully picked at the edge of the yoke and frogged it, but then I just couldn't pick up the stitches, very well, so I gave up the whole thing and frogged every part. Since by now, I've see how the stitch counts, increases/decreases worked out I started it at the neckline, and worked my way from the top down, using a different lattice motif. 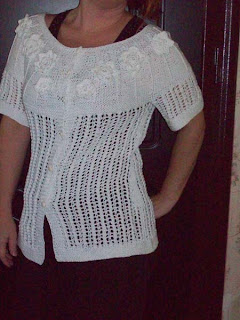 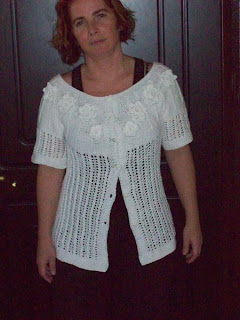 I made up the crocheted flowers from the top of my head. 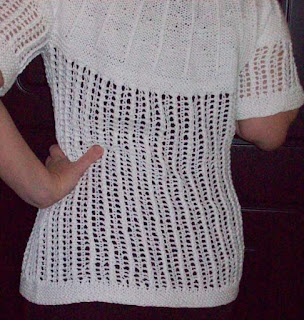 You see, I fixed my camera problem... how? I did nothing. I would like to think that there was no problem to begin with, but I tried the darn thing with two computers, my table one and the laptop and it didn't worked with either one. Last night I sat down to figure out how the card reader box works (yeah, I have one, which I never used), when I thought, why don't I give it one last try? I plugged it in, I pushed a bit harder than usual, and loo and behold, it started to read the contents in.Go figure.
Anyway, pictures are here.
This is a scarf/stole I started in late spring from the pattern called Haruha scarf. Since I knew I wanted a wider one I added a few repeats to the width, and knitted on. Then kept on knitting. And knitted a little bit more. Forever this was my "take-away project" the one I stuffed in my bag when I was taking Chris to the playground, when going to knitting club, when waiting for the doc.Never at home, those times were for more complicated stuff. At the end I grew rather bored with it, thank god I run out of yarn when I did, otherwise I was ready to throw the towel in and use it for a pillowcase.
Even if it is a rather simple lacy pattern and straight shape, blocking never cease to awe me.
The scarf before: 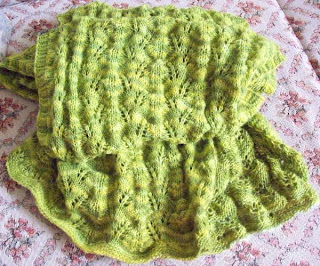 Pinned out for blocking (that is a big Ikea bath towel on my floor): 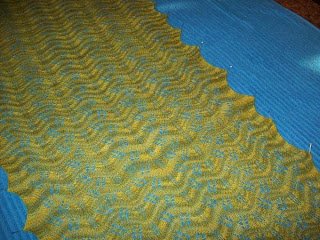 Me wearing it as a stole: 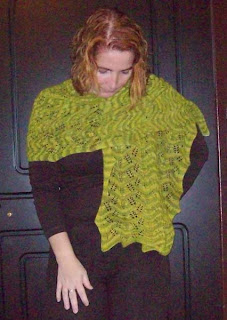 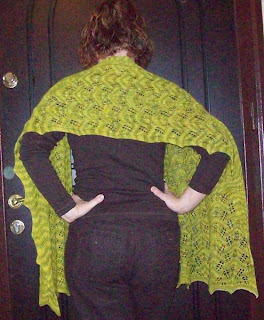 And wearing it as a scarf: 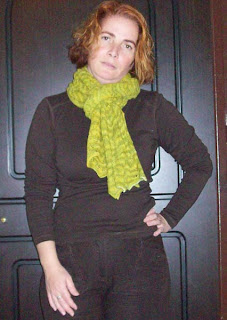 The pattern is the haruha scarf repeated five or six time, with a three stitch wide plain garter border. The yarn is handpainted laceweight merino knitted on 3.5 mm bamboo needle from my favourite ebay seller. I already mentioned her here a few times, she is the best. Since I kept this knit in my bag for a long while, and I knitted usually in public, sometimes when I put it away fast, I lost one of the needles... more than one. She was always on hand sending me the replacements really fast and my order never came without something extra in the package. Thank you Bing/Irene!

As it is usual by now, pictures were shot by my talented boy. Thank you sweetheart :-)

sorry, i didn't mean to disappear... Aside from the extra work that needed to be done, I am having some technical difficulties. My computer at home is acting up. It has memory issues, slow as a snail, and the DVD burner doesn't work. I already bought a new burner, but being such a computer dummie, I cannot put it in... If I could do that I could take out the things I want to keep (patterns, pictures, whatnot), then I could format the hole thing and rebuild it. Now, my brother is a computer genius (he wrote books on Java and other things) but he, for some reason cannot find the time to come and help me :-(... To top it all, my camera is acting weird. It takes pictures all right, I can review them there, but when I connect it to the computer the computer senses that it is plugged it, but cannot reach the data... So no pictures until I figure out what is wrong and find a way to fix it.
Believe me, I had a few things lined up to show you, knitting, and spinning, and other things, but a blog, especially a knitting6crafty blog without pictures, is like eating a big dinner but feeling no taste of it...arrgh.
Posted by peony at 9:30 AM 1 comment: