Just in about three weeks, we are going to have a ball. A georgian ball at that, with the dresscode between 1750 and 1820, which includes the late rococo, georgian and the regency style dresses. Since - though I did all the dance practices and learned all the dances- did not went to the Jane Austen ball two years ago (which is still a sore point), and partly because I rather like regency clothes and because every joke is new for a newborn, I decided to go for the regency style this year. I am not overly fond of the overly decorated rococo style to start with. There ARE certain pieces and styles I like (the english roundgown for example), but I also have to consider the time I have to do this the ease of shipping (the ball will be in Keszthely- another city- I will either catch a ride with somebody, or take a train--will see that. But neither would be favorable for too big or too much packages.

As for the clothes, with every historical dress, you have to start at the foundation. No dress will fit and look as it "just dropped through a split in the fabric of time" if one does not wear the proper underclothes, so let's just start at the bottom. Regency clothes look like there is not much underneath, but that is just an illusion. the first layer is... yes, they did wear some kind of corsets- a pair of stays mostly to push the boobs up high, but that is not the first layer. No woman in their right mind wears stays or corsets directly on their skin, there is a shift, a chemies, or something similar underneath.
Also since I have a considerable extra weight, my thights are chafing in the heat, I need drawers as well.
Learned my lesson last summer in Savaria, for a two day even you need at least two sets of underwear. 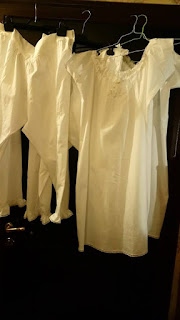 Two shifts and two drawers. For the shift I used the pattern I drew up last year, when I made the mid-victorian ensemble. 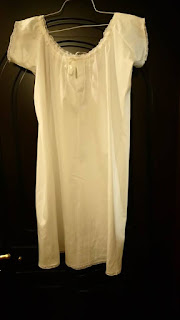 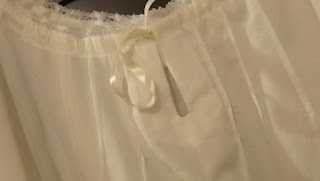 Drawstring neckline, tiny pintucks and lace at the edges. 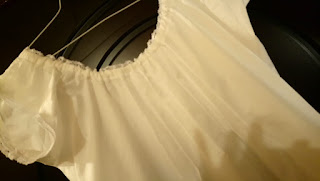 Drawers in the regency period just started to make their appearance in the ladies wardrobes, partly for modestly partly for health reasons. Those dresses were thin, and often see through. Drawers, howeevr were considered rather saucy choice.

Actually only the two legs were put up on a waistband, I cheated just a little bit, by adding a normal waist. 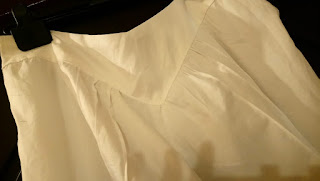 They were narrower and longer than their victorian counterparts, sometimes even to the point where they were peeping out from the hems of the skirts. 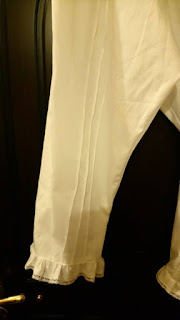 I tried to emphasize the narrower, but longer lines with vertical pintucks and added ruffles as a nod to sauciness. 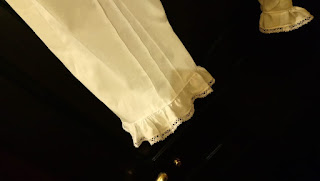 And if you ever wondered how they used to lighten their bodily burdens... here is the secret: 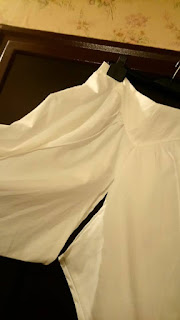 The next time: corset.
Posted by peony at 9:50 AM No comments:

Question of the day..

Just to show the delpth of the problems I am facing... the question of the day is: if I want lace between the panels for a late 15th century camicia should I use (and therefore learn) needle lace, or should I just do a simpler, narrow lace from teh Le Pompe book.
I posed the question to a friend a couple of days ago, and she said, she understands the word of "between", "late" and "century"but has no idea, what I am talking about.
Stay tuned and I will explain later. Until then the pictures of me trying out a new Le Pompe pattern, to see whether it would be suitable for teh above mentioned purpouse. 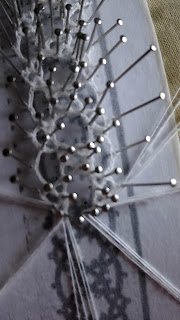 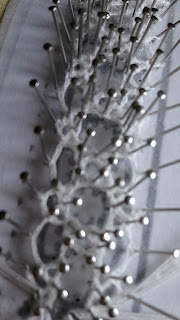 And one additional to show what happens, when the mailman rings, and I stand up so fast that the whole stand and pillow flies away. 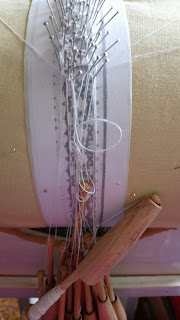