There was some before the sh** hit the fan, then no knitting for weeks. I simply couldn't pay enough attention, I didn't feel like it.
I sat in my bedroom looking at the boxes full of yarn, and wondered what will happen to them...
Then slowly I started again picking it up here and there, and then it all came back...
Here are some pictures, and then more will come.
Here is the red Urchin I made in November 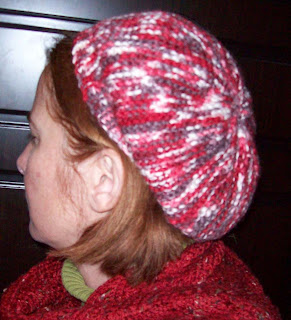 The yarn came from the same Uruguay company as the yellow lace. I was very happy with how it knitted up. 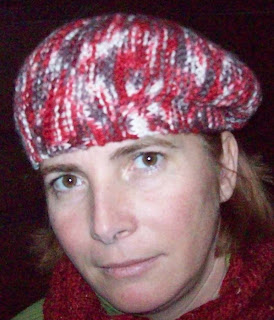 Then having succes with the fair isle west I thought I might try a beret with self striping yarn: 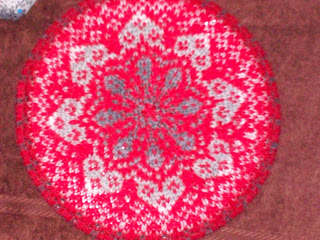 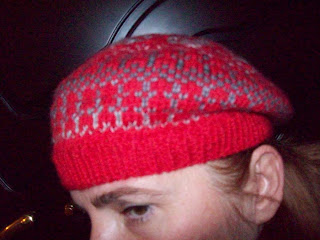 Also there were my knucks (fingerless gloves) : 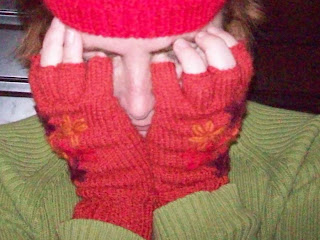 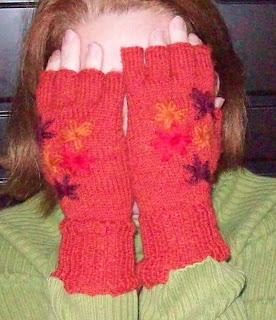 And I thought I might add a feature for a while...
What did I do today I wouldn't have if P. would be here?
Chris woke me up at 3AM, and I couldn't fall back asleep... For a long time. So I could turn the TV on and knit.
We had breakfast at 11 in the morning...
The cable men were here to connect the net and TV and phone and we just didn't got around it...
I also didn't feel like cooking so we just ordered a PIZZA (without feeling a complete slob).

After many weeks of incredibly maddeningly slow connection, and then an other couple weeks of absolutely no internet I have service again...
I am still alive, coping thank God, I even knitted some this and that...
Things are far from being solved, but I am hopeful.
Posted by peony at 11:32 AM 2 comments:

P. is gone.
I am hurt all over, especially inside, I feel like my heart was teared out. I was trying so hard to find a peaceful solution, but it was just not to be.
As you all know I was sick all weekend (when he went to the shopping mall I asked him to bring me nosedrop, but he didn't, but that is just one small thing... didn't even mattered much, but so typical).
Anyway last week in ann email he asked me to pay some bills and I he promised the money wil be on my desk when I get home. It was not. (nor did I got the money for the bill I paid a month ago). Monday morning we got into an argument about how I cannot trust him even with things like this.
He wanted to stop it with shutting the door in my face. It was the entrance door, and I was still inside, so he pushed me out with the door. I went back to tell him that he cannot kick me out of my own home, and from then it went all downhill, he attacked me, wanted to hit me.

Later when my dad called him, P. told that "his head is bleeding" because I hit him. I was defending myself, and my keyes were in my hand... but he is bigger, and stronger...
I told him I want him out. that day.

I was all shaking when I got into work. I called my dad, because I decided that this just cannot go on anymore. I cannot let Chris witness this. My dad called him and told him he has to go, but he refused. He and his wife drove here.
At the afternoon P. (like nothing happened called me that I should by brea for the evening. I told him that he shouldn't thing that I will let this pass, and once again he would continue like nothing happened... Chris stayed down with my dad's wife, and the two of us went up. P. was cleaning (vacuuming!!!!!) like he has no care on the world. My dad told him (very strongly) that he has to levae, he refused, saying that he talked to his lawyer and she told him, that he has every right to stay... he repetaedly tried to call the layer, and my dad repetedly broke the connection ("don't call the lawyer, talk to me") .At a point P attacked my dad, he wanted to hit/beat him, but my dad was suprisingly strong, much stronger, but furniture still flew around...
Then my dad called his wife, who called the police. They came about fifteen minutes later. While we were waiting P. kept vacuuming... We did told him, that he still have a chance to leave peacfully but he was ever so obstinate...
The police came lisened to out story, he checked our papers, my dad showed his retired army officer card... P. kept telling that he has every right to be there, and then they asked for his adress card (if you live somewhere you have to have an official adress ID card, it can be obained with the permission of the owner of the place--- he was careful to avoid every official thing...avoid taxes, and avoid leaving traces- now it backfired on him) and he couldn't show one. He has none. The policemen was very nice, calm and patient, and straight to the point, he told him that we can report each other forever and keep fighting, but for the sake of the child, it would be better for everyone to leave, and please would he pack up his personal belongings and leave... he tried to fight it but he had to leave. my dad sent me off while he was going...
I felt like my heart is breaking, I sooo wanted to solve this peacefuly, but he resisted every attempt...

I felt so sorry when he was leaving like a lost, beaten dog...

He left, we changed the lock, and I haven't heard from him since. I don't know where he spent the night,
Christopher was crying because he didn't got his usual evening story, then because he couldn't say goodby to his dad... poor kid.
I haven't slept one minute, I haven't ate anything since sunday...
I can't even cry... I keep feeling I will break out crying, but I just can't.

I can't say how sorry I am that it came to this... But I don't know what could I have done differently.
Posted by peony at 10:15 AM 7 comments: