Try as I might, I will not manage to put up the six blog post that seemed going so well since the beginning of the year... however, if I cound average (taking the fact that in january there were 8 posts..)... I am not that bad off...

Now this post I probably would need to file under "in other news"... Or something...

Anyhow, the exciting thing for the last week, that summer programs, concerts, festivals start to pop up, and we BOUGHT TICKETS for some sUmmer fEstivals!!!

What is more we already managed to attend the first event with LIVE MUSIC. It is almost unbelievable. Even a few weeks ago, when the government started to loosen the grip of pandemic rules, it seemed almost impossible even last' year's level of events would happen...

Now, let's not get into the fact how the "closing" was, how the first few weave of opening was not really opening, how illogical many rulings were, how unfair many of it seemed, Now I just wanted to focus on what is now.

FB pushed the event in my face, about the one man "show" of Zoltan Beck, who, for me, was the guy, who wrote the songs I love from Magashegy Underground (yet another Hungarian band). Of course I knew he had his own band and music, but largely I did not pay all that attention to. So I don't really know why I felt we might just go and see... Probably I was curious, it was in the city where N lives (officially at least LOL), and hey... IT supposed to have LIVE music. 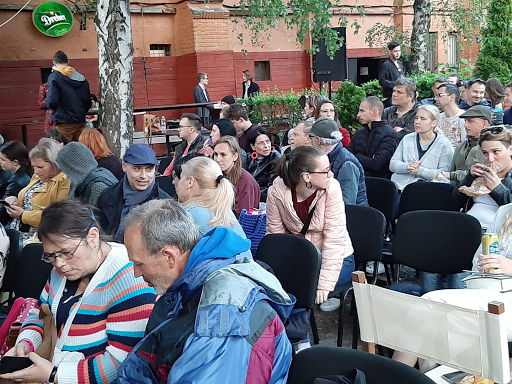 When we got there, first I was enchanted by the fact, that there were PEOPLE there.
People WITHOUT MASKS. They had FACES. Never really made a secreat about the fact I desparately hate these masks, by now I can't even stand their smell anymore. 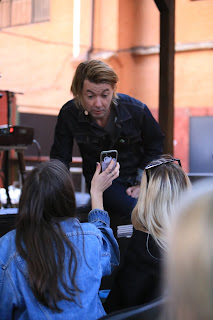 But what bothered me, that I miss seeing people's FACES, Their smiles. Their wrinkles. The tiny twitch of the corner of their mouth that can tell you so many things. 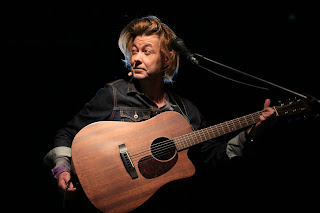 The performance was a combination of monologues, some poems, and songs, about life, meeting ourselves, boys and fathers, boy and mothers, love, all kinds of things, and I enjoyed it tremendously. 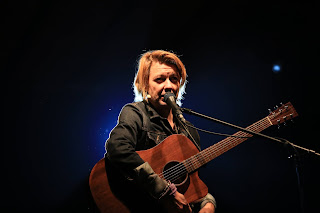 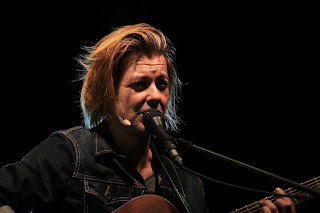 I am actually sorry that this was the last run of this one. 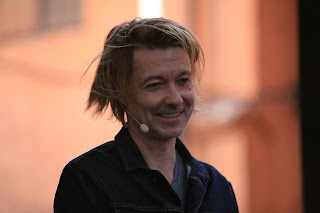 But also the first one, of something new. 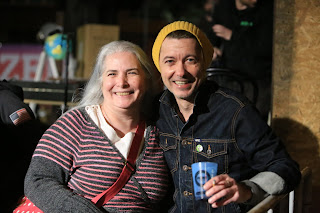 Photoes: Norbert Varga
Posted by peony at 5:15 PM No comments:

In our other news (should this be a regular feauture?)...

In which I thought if I am going to store my sockyran in my living romm(as well) I might just put them in rainbow order... 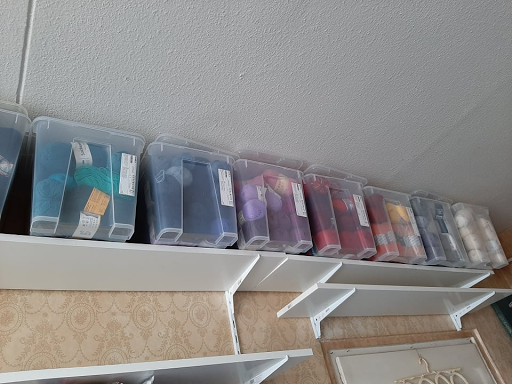 to the past... or to our regular crafty-, what is more, knitting program...

Now that I had a few days to revel in the fact of how one moment, one small movement can change one's life, I also had that few days to think about how much you my "dear readers" all the handful of you might be curious about my personal life. It happened, that I was conversing with an old friend on messenger, whom I haven't really talked in ages, except for a few exchanged sentences here and there. In that conversation I was utterly suprised, that she didn't only read my blog... but she reads in English, what is more, she remembers details I've written down but I since forgot about...

Now, until I figure out just how much do you might want to know about the person behind the crafts, here is something that takes us back... not just to our regular knitting posts, but also back in time, because this piece I've knitted a few years ago... even before the circle cardigan... 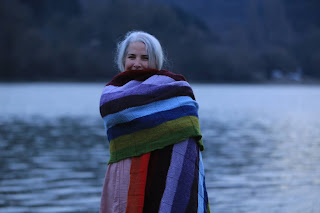 Admittedly, the idea is not mine. I've seen it on Pinterest. Once. Once, but, try as I might, I could never ever manage to dig that picture out again. However, the idea stuck in my head.

All I remembered, it was a wrap, with colorful yarns, put in an order that though was not a true rainbow, had a ranbow-ish effect. 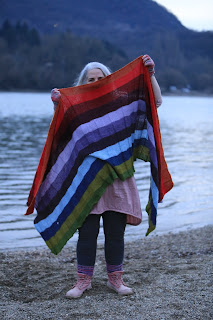 So back in 2015 I walked into the store that used to be Barkafonal... umm I have to admit, I don't even remember at that time which incarnation it was, Barka or Kacskaringo, or what. Neither of them exists anymore, so however sad that is, I am afraid it does not really matter anymore. 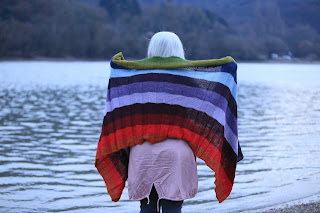 Anyhow, I walked in the store, and picked out 9 balls of Alpaca yarn, different colored but each from the so called "mixed" heathery colors. 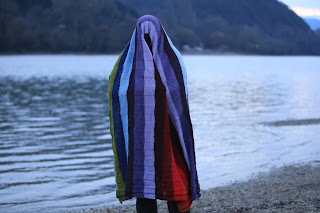 I cast on many stitched (440 or so), and knitted in K10 / P10 pattern. Started from orange, then red, bordeaux, purple, etc. Whenever a ball run out, I slimply joined the next one. I did not wait for the end of the row, or anything. I guess, I even tied a knot for the join. 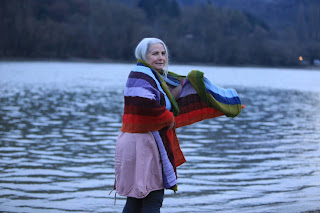 When I was running out of the last color (green, mixed), I tried to measure how much I use for one row, and left twice as much for the cast of, and then, when I had just as much yarn as enough to cats off, I did so, the knitted stitches with knits, the purled stitches with purl. Yarn ends were sewn in, and that was that.

Actually, would it not be the lovely colors of the yarn, this would be an awfully boring piece, as it was an awfully boring knit. Probably the only reason I actually finished it was that I've knitted in in many university classes, back, when in my did my post-grad translation course. Knits and purls, back and forth were perfect to take the edge of the classes that were not always the most exciting.

I don't even know why I never posted about it, but so many things happened then (Christopher's accident, for example), and especially since. However, it is actually a nice piece, so I grabbed it when we were doing some photos, back in january, but left it last for that day, so the sun was going down, and the lights are off, but here you go. 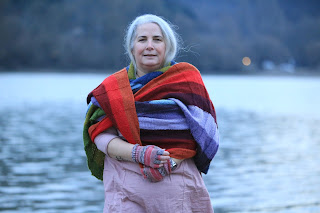 A certain point of time

When you know exactly which moment is, when a smile, and a touch, launches a complicated long series of event, but that changes your life completely. 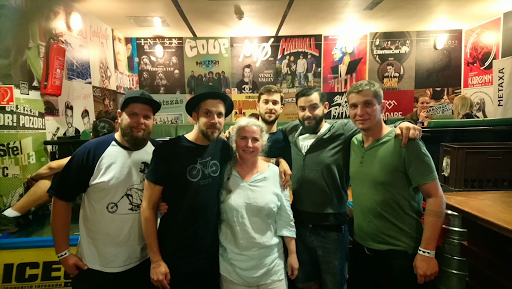 Now, how the above picture resulted in the picture below is to long and complicated to go into detail here, besides, I could not do it without being tacky and cheesy, let's just say, they are directly related to each other. 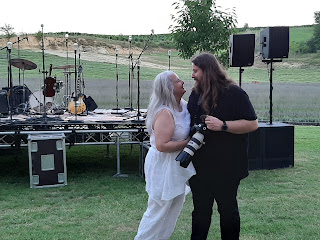 I will never forget, and I will always grateful for it.
Posted by peony at 4:30 AM No comments:

This is Budapest, Székesfehérvár, Budapest.

(I admit, there was a traffic jam going, but N őushed the speed limit back, so...) 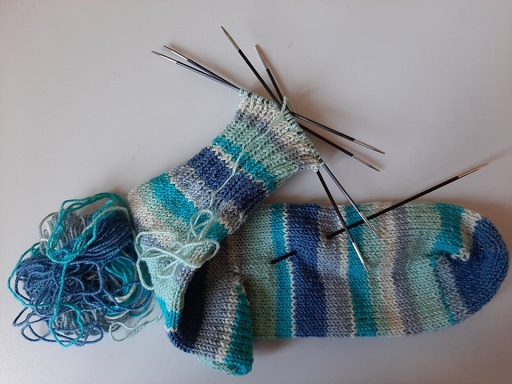