Just north of Budapest there is a gorgeous little city on the bank of the Duna, called Szentendre.
Just outside of it there is an open air museum called Skanzen, where they take old houses from different areas of the country, take apart and reassemble it, fill it with appropriate furniture and other household items, and the visitors can see how our ancestors lived.
When Chris had been there with his class in their outing the school wanted no parents there, but once in a while I enjoy seeing all that beauty. Also wanted to spend some real quality time with my boy (who spent his weekdays with his father, and I missed him terribly).
The place is really pretty, but unfortunately despite what they say on their website there was no organized program even on a Saturday afternoon. The site promised spinning, weaving, candle making beading and such, but there was none of that. In fact though they also say there is a bakery on the site, they had NOTHING by 2 PM...
But the place IS pretty with houses like this: 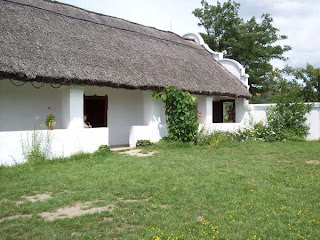 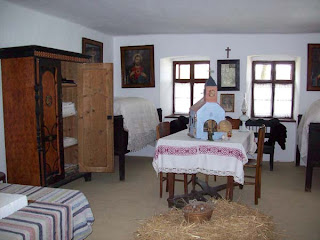 You can see the old fashioned ovens they used to bake bread in: 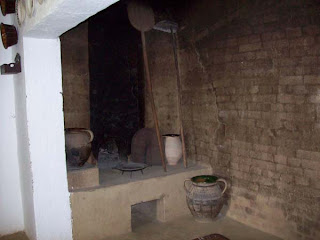 And the open hearth where they cooked for centuries 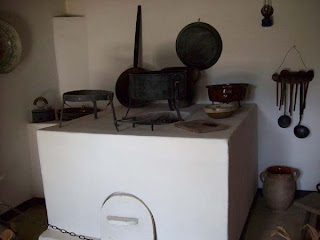 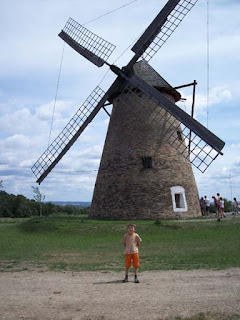 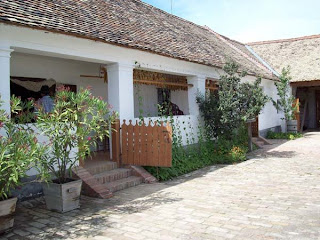 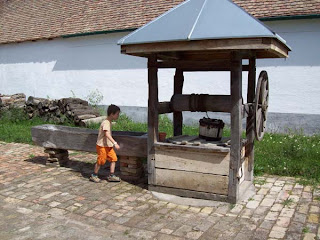 And houses from an other are of the country, just north of the lake Balaton (Can you see how I love those houses with those deep, covered verandas?) 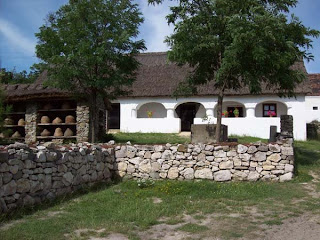 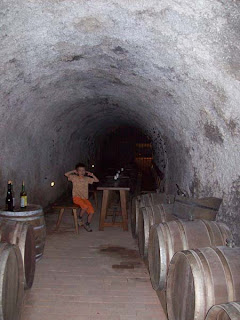 And even though there were the special breed of sheep called raczka: 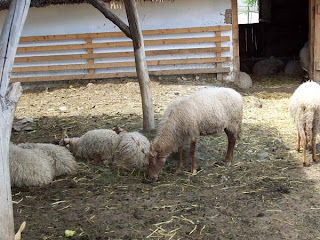 We had a hard time to find a working weaving frame... It was a huge favor from the lady (who specifically asked not to have his picture on the net) to show Chris how it works. 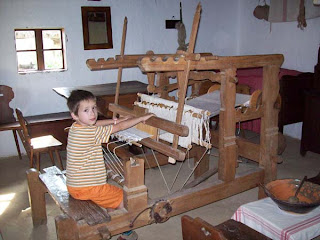 But the spindle and the wheel was only decoration. 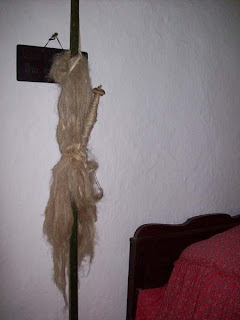 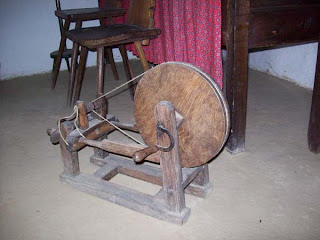 They had an "eco-playground" with wood toys and such and this bowling with water filled plastic bottles: 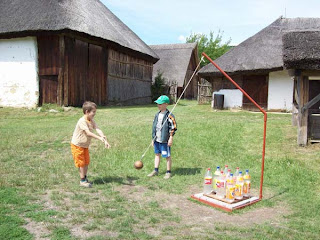 We were pretty tired from all that walking around, but still a walk in the city itself was worth going for a bit longer. 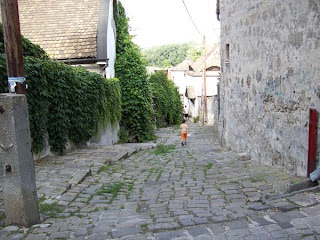 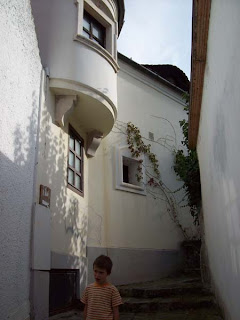 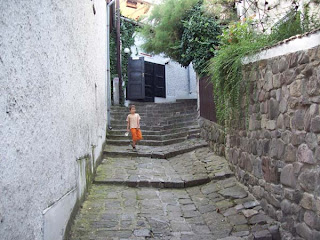 All in all I declared the day a lovely outing.
Posted by peony at 5:20 PM 2 comments:

Since I promised...
My main knitting excitement was that Lene of Dancing with Wool commented on my blog... OMG she knits such a gorgeous things, I was absolutely honored...
Lately I was working on the Icarus shawl , which came to a sudden halt when I run out of yarn about twenty rows before the end... just because some of you asked, here is how 500 and some stitches of lace weight looks on a 14" long 3 mm needle (yes I do knit it on straights): 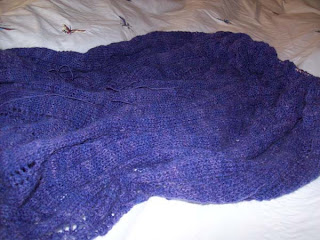 The major problem is that knitting the Icarus shawl I've run out of yarn about twenty row before the end (considering that the shawl is about 300 or so rows, that is close)... I combed through Ebay and etsy hoping to find something, but you all know how it would be trying to match colors through the screen... I got in contact with Teal, who said will dye some more for me, but it would never exactly match... well I just have to wait and see... since the missing part is the scallopy edge, I can use a different shade (even a totally different one, like lilac) and call it a design element... 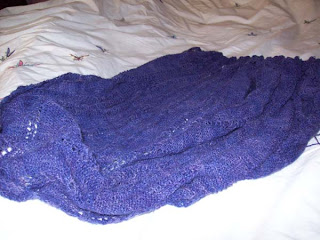 I am also knitting a cardigan for the baby girl of my friend. She was born in early march, it is high time I go and visit them. 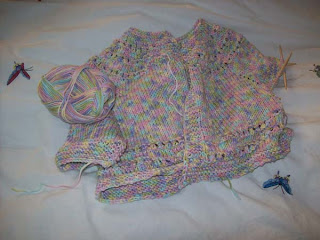 And the Apres Surf Hoodie is on the needle... I had this Brown Sheep Cotton Fleece in my stash for over a year now, and also had the hoodie in my queue for about the same time...I am not sure how I made the connection, but I am loving how it shapes up. 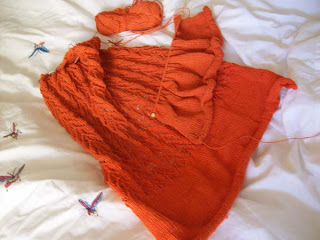 Almost forgot to put on these pictures...
My bedroom is about 10 square meters and as most European places has no closets.

Last year when at my last try to get P. to organize the flat and give Chris his room I bought a gardrobe cabinet... P. never managed to put it together, but it is all in one piece now, and fits where I intended it to.

Chiffarobe is a word a lady in my Ravelry decluttering group came up with, and I love it... so do I love the chiffarobe itself. 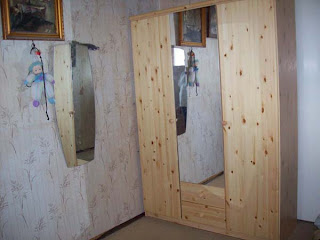 Took as almost a day to figure out what goes where and put everything in its place...

Here is my father, who looks rather satisfied with the day's work: 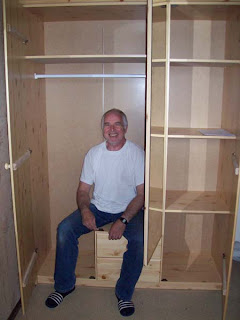 I know I promised knitting content, but I've run into some problems (umm running out of yarn, and loosing needles )... so just not to leave this blog empty here are some pictures of summer weekends...
The Kid's Island.. organized by the biggest telecommunication company for a few weekends in early summer they rent this island in the Duna, put out lots of entertainment, blown up castles, jumping castles, slides, there are places for crafts and other adventures.
Christopher's favorite were the jumping castles and slides, and this thingy, which was blown up, the kids were put on a belt and a flexible tape (?) and they had to run as hard as they could before the rubber tape pulled them back... Chris loved it, stood in the line many times to try it again, and again... 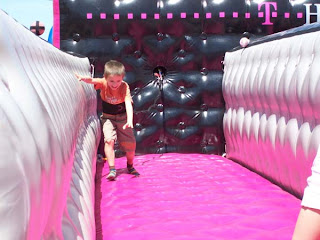 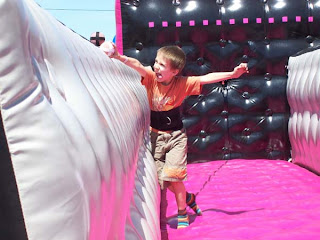 Then we were making "pogácsa" it is a biscuit kind of thing (or scones?) made of leavened yeast dough, and could be flavored with bacon, sauteed cabbage, fresh cheese,... this particular one contained potatoes and grated smoked cheese: 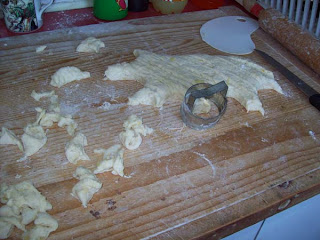 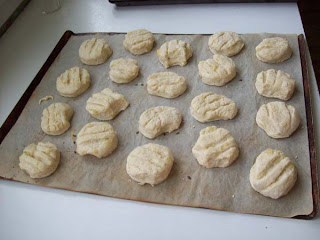 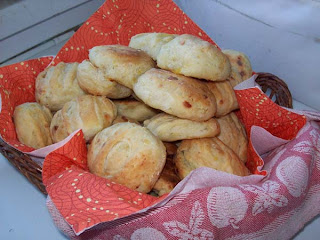