Random sewing post out of the blue: Cords, cords, round and round

By now I am not apologizing, not promising anything, just let's see what comes, shall we?
I was fully prepared to put up a post (or more posts) about our London trip, but still haven't got around to download a bunch of pictures from the camera, so that should wait.
On the other hand my adventures, in the world of historical clothes continue, and there was a set of early renessaince worker woman's clothing made (pictures later), and now I would need to do an early baroque worker woman's outfit by this weekend... thus it is the perfectly logical decision to start an early 19th century corded petticoat, right? I like to live dangerously.
Anyway, you've seen my 1860 ballgown, and the crinolin underneath. But before crinolins came into fashion in the mid 1850's... following the the sleek lines of regency dresses at the beginning of the century, in the 1820's the skirts started to get wider, and wider, and more and more petticoats were put underneath, and they used several trick to keep them as wide as possible, like quilted and ruffled petticoats. Cords were also used to stiffen clothing (even in stays). Here are a couple of examples: I will need an early victorian ensemble at the end of August, and these clothes are better built from the inside out, from the foundation, which is very important, I started with the petticoat.

I took the plainest white sifon, which is available in 240 cm width, and a ball of the thickest tie/rope/cord I could find in the gardening store (made from hemp). 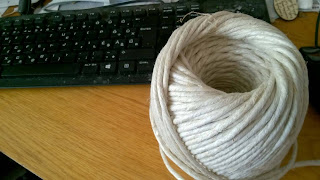 Cut the fabrick to the length of twice the length I wanted my skirt plus about 10 cm for the amount takn up by the cord casings (95x2 = 190 cm). Folded it lengthwise and sewed the finished selvege (left about 15-20 cm open at  both end, for the slit). Ironed the seam apart, and folded the tube in half crosswise, so I got a double valled tube, half as long.
Then, pushing the rope to the edge, I started to sew it around. 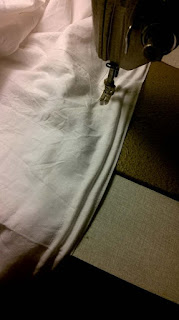 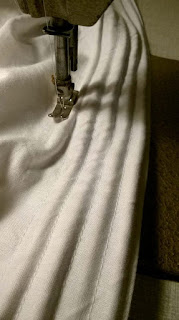 and around... Sometimes I sew a round empty, leaving out the rope. 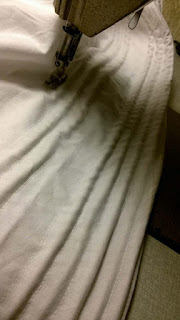 and around, and around.
Finally, I pinned the open slits together, and sewed, then pulled in the waist line, and added a waitsband. 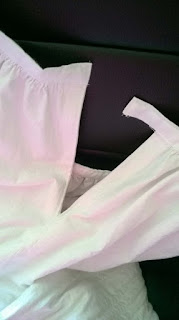 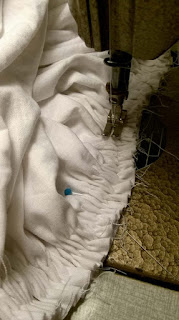 And voilá...The whole petticoat is about 85 cm long. 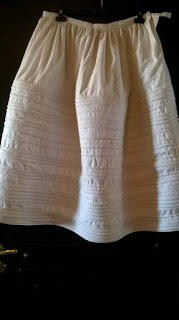 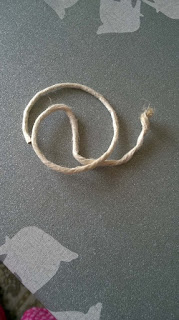