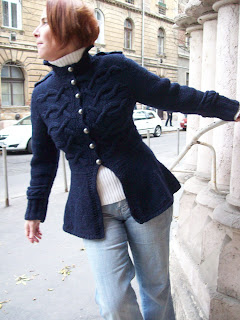 Which took me two weeks to the hour to complete from casting on... And that is with considerable time spent on the fall set and the knitting lessons.
It was love at first sight, as I opened the fall issue of the Rebecca magazine I knew I had to have this, soon, no matter what. Was it the cables? The fitted shape? The peplum? All traits I would go for, and together they almost made me swoon. As soon as I got home, didn't even took my coat off, but I got on the net and ordered the yarn... 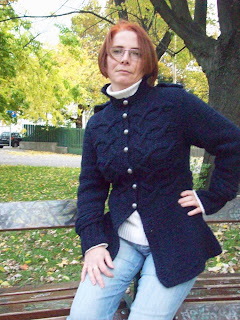 The original in the magazine was made from GGH Camello which I didn't think I could get fast enough and an affordable price. (Later it turned out I was wrong, one of the two yarn stores that sells good yarn in Hungary 1001 fonal does have it, but that is an other story.)

Anyway I wanted it from something tweedy, and I was on a blue phase at the moment I turned to my trusted source for tweedy, heather pure wool or wool/silk yarn. Kingcraigs fabric. I have so many of their yarn it is a surprise that this is the first actual item I finished from all of those... Oh, I've knitted with them all right, I many more swatches than I care to count. I still have to finish my Venezia, and block the cabled rusty orange cardigan... But I know by now that I love this yarn. Coming directly from the factory on scones (most of the time) it feels a little scartchy, maybe even rough, not to mention it smells. But it already starts ro softens while knitting, and after washing... oh, after washing it blooms gorgeously, it softens up greatly, and the smell (which comes from the natural oils in the wool itself) goes away. Of course it will never be as soft as, let say Malabrigo, but I bet because of the tighter spin, it will hold up much better in the long run. It definetly does not relax as many of the other, softer yarns does. 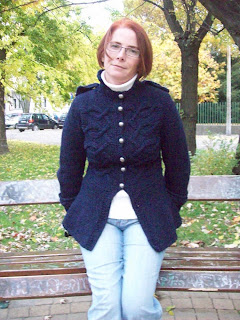 Every time I shop with these guys is a great experience... Just like this time, I incidently clicked on the wrong item and bought the smaller, 500 gramm cone (instead of the 800 I would needed). Since I have a bit of history with Shaun and Jamie, I didn't panic, but shot out a note that please, please send the bill for and ship the bigger one. Instead of the invoice there came a note... oh we already shipped the cone, but we are sending you the extra 300 gramms free of charge for being such a good customer. All came in good time. Thank you so much.

We've been exchanging a few letters on how to introduce their yarn in here, if there is a bigger quantity they would give a considerable discount. If anyone interested let me know, I would gladly organize it.

When it came I was a bit disappointed, which was completely my fault, as I knew this yarn (though in different color) because it was thinner than I expected, and since it is a Jacket, would do well to readjust the pattern for a much smaller gauge... But then the idea hit and I doubled the yarn, and the gauge was just slightly smaller than in the pattern itself (which was in one size, size 40, that would be a bit too big anyway). 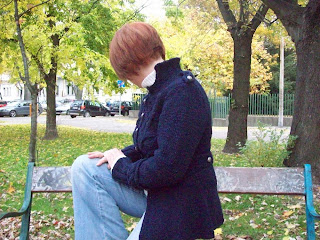 With the pattern I also run into a bit of trouble as it was written in German. A language I used to learn in highschool, but forgot a great deal ever since. Regula came to my rescue and went through the pattern with me one saturday afternoon. At that day I got home cast on, and it was blocking within two weeks to the hour. 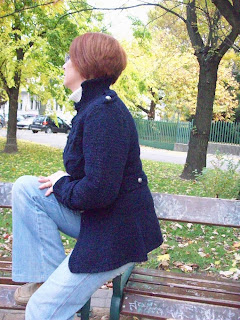 I only modified a couple of things. lengtened the peplum by one inch, the sleeves a bit. The cables on the back belt, the shoulder stripes and at the wrist are mirrored. And added a crocheted buttonhole and buttonband, because I didn't like how the knitted fabric did not had enough hold for the buttons and buttonholes. Not to mention with the additional inch it fits me better. 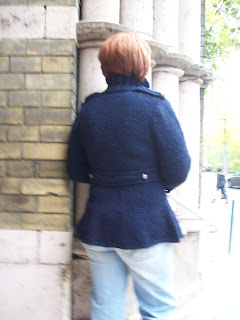 Because of the big gauge the knitting went really fast.

Buttons from the Röltex chain. 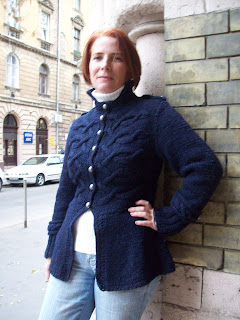 Pictures are shot by my personal photographer, my son. Thanks Chris.

BTW. I have a new haircut, did you notice?

The cooperation with Barkafonal and my knitting"carreer" arrived to a new point...
I have knitted before without using a pattern, or modifying it until it was not recognizable, or looking at a picture, knitting something and the result somehow looked pretty much like the picture, even though I could not read the pattern (my German is nonexistent)...
Now, for Barkafonal I had to design something brand new I , from total scratch, and such a way that could be written down and shown how to do it for others (who would be able to understand it...)
It gave me a biggertask, because I had to use one particular yarn, a handdyed one from a thicker variety. As we all know it is not easy to work with handdyed yarns, especially with the ones that have strong contrast between the colors, because it can "break up" the pattern. So I had to think up something that would not clash with the colors, but they would enhance each other. After several swatch I came to the conclusion that my original idea, the 1x1 cables (and their variation) would indeed work well.
There were also othe requirements such as no more than two hanks for all three pieces, not too experienced knitters should be able to do them but it shouldn't be to boring for the more experienced ones, all three pieces should be useable separatly and knitted from less than one hank...
So the fall set of neckwarmer, fingerless gloves and beret was knitted and written up very detailed way with lots of pictures. Doing a beret was the obvious choice as it is the only type of hat that suits me (or so I think). I love fingerless gloves, as they stilll warm my hands, but still enable me to handle money, or keys, or my public transport pass withouth taking them off. As for the neckwarmer I long wanted to do something romantic, tudor style, ruffled something, but kept putting it off... there is no better opportunity, right?
So, here they are. The detailed instructions with ton of pictures are on the Barkafonal's page, at the moment only in Hungarian though. I hope I will have enough time soon to do the translations for English... 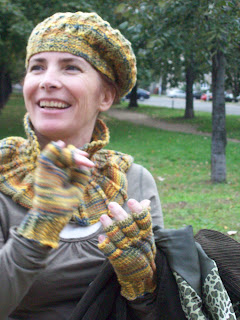 Just a quick note with an Fo that was finished about two or three weeks ago.
Made from the yarn I had leftover from my coachella . It was not a full all, and I have still enough left maybe for a kid sized pair. 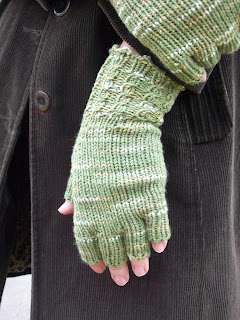 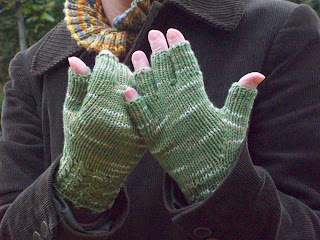 Top (fingers) down construction, and cabled ribbing.
Posted by peony at 4:00 PM 1 comment:

You already know about my love for tweed yarn, also for second hand shops, right? Often I buy a ball of yarn, just because I like it, an wonder later what to do with it... as I was digging in my stash a couple of weeks ago, these yarns landed in the same heap, and as I was about to put them back when I looked at the bands and realized they are almost the same quality and the colors go well toogether. It all was not enough for a full sweater, but I had something similar in my mind for a while anyway. 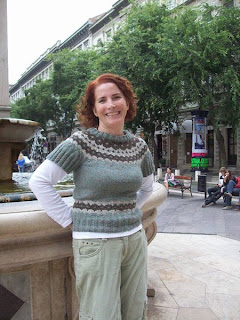 I've never knitted fair isle round yoke before, and I just made up the pattern as I went, but it turned out pretty good, I think. 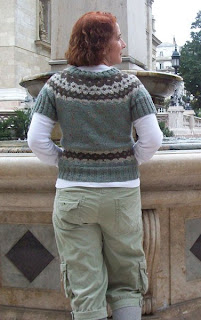 The gauge was bigger than my usual, and thanks to that the knitting went really fast. 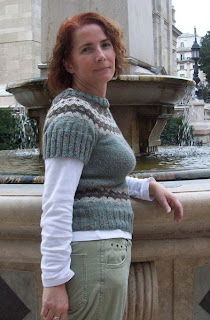 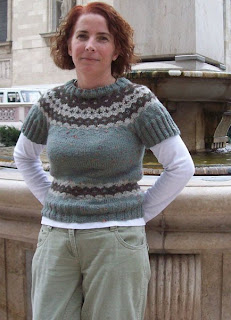 Now I want it in other colors too :-)

Regula, thanks for shooting the pictures:-)
Posted by peony at 9:00 PM 3 comments:

As much as I love knitting I want to spread it. I want to teach everyone... Also I love to talk and write about knitting. I am already teaching lessons in a small yarnshop (and all of those who would let me), now I can take it a step further.
The owner of one of the hungarian web-shop approached me about taking part in her online knitting lessons, and designing some items for her yarns. The first is a set of neck-warmer, beret and fingerless gloves with mini-cables, and as a prologue there is a lesson on how to do cables, which is already up here.
Sorry, the text is all in hungarian, but there are a ton of pics...
Posted by peony at 8:47 PM 2 comments: