Even though I rarely go to fairs/festivals/markets to sell my wool, my friend Enikő convinced me, that her spindles and wood-stuff (buttons, shawl pins, etc) would go well with my fiber and yarn.
Also, I had some of my time freed up, so I could say yes...and spend two days spinning on the wheel that is being developed by Enikő and her husband, chatting people, and just NOT being at my desk, and keyboard. Would I went for the sales and money, I would have been rather dissapointed I guess, but since that was not the most important consideration, I enjoyed the two days... and learned some things... 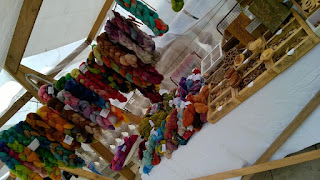 The best place does not guarantee the most customers...
There are more and more ladies embrace their natural gray colors.
And they all love a compliment on their hair.
It is possible to get totally freezed out and sunburned at the same day.
It is possible to go the whole day with only one or two bathroom breaks.
That the nearest bathroom is in the National Gallery, and you have to pay to get in, does not guarantee that it is clean and well stocked with paper and soap...

That it is possible to start a friendship based on a haircolor :-). 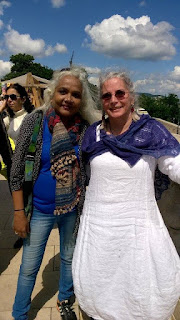 That I can sit and spin for two hole day in a row... 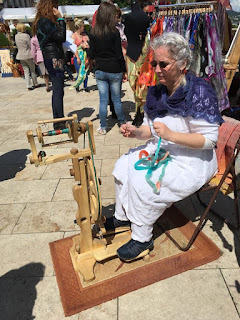 And that I love when í friendly face turns up :-) 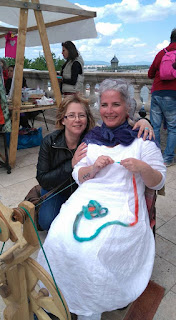 Can fall apart in a second...just like that.
Thank you for everyone who sent me notes/chats emails, Things are more or less fine.
I really, really had the best intention get the blog going on, more or less regurarly again.
Especially since I finally finished the University adventure, I thought that getting two days back in a week, will allow me to... however I was wrong, I still did not manage to catch up with everything, and then a sudden wandering virus, a nasty fight with a certain teenager, crumbling immune-system resulted in an illness... An illness to wich resulted me not being able to get up, or out of bad for days, and it lasted for week... in all honesty I haven't been this ill in many years, probably since 2009, when I had pneumonia.
Adding to that a deadline that was at least two weeks shorter than it was supposed to be, a Day of Wool that required days of preparation... not to mention stuff, like selecting/finding high-shcool for Chris, freaking out because of a lazy buerocrat and other official things, I was either running around like a headless chick, or working 16-20 hours a day to meat every deadline, get done everything in time- and still there were, some for whom it wasn't enough... . (The record was working 24 hours in one straight sitting...).

All this means I hardly ever knit, but I did manage to squese some spining (yes, to keep my mind in order was more important than... let say eating. Or sleeping.), and I still have stuff from earlier to show you... yes, pictures and posts will come.
Thank you all for being so patient.
Posted by peony at 12:18 PM 1 comment: