A wedding, or the red dress in use

So I have told you about how and why my "red dress" was made, now I will show you some pictures, how it looked when I wore it to the event I made it for, which was a wedding. Well, yes, I wanted to make something from the 18th century (in fact, I want to make not only something, but a lot of stuff from that eara, but that is another story), but I made it to wear at the wedding. Also, with the thought that if I will have the dress, there might be some event(s) to wear it... (as 18th century reenactment, especially civilian, is literarly nonexistent in Hungary).

Anyhow, as part of the summer events catch up series, here is a few picture and a video showing the dress in use. 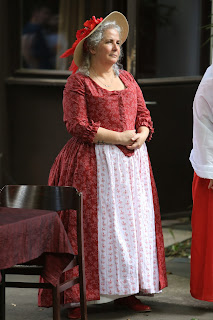 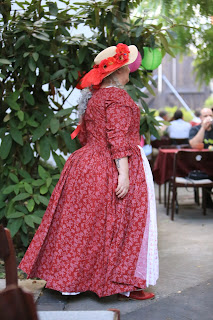 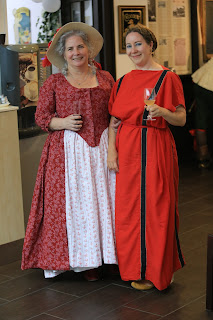 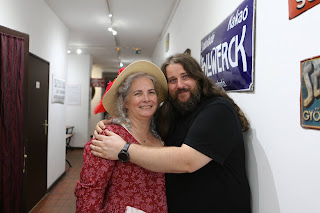 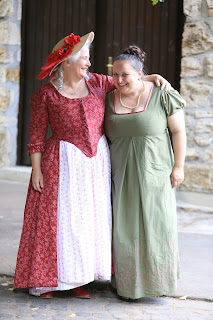 Okay, calmed down now. Let me try this again.

So, even though my hair is silver and long, admittedly, I do not have much of it anymore (thans thyroids). For historical events I always try to spurce it up with different hairpieces, but since there is little to attach them too, after a few hours they can hurt. After Komárom, I took off my hair crying, because the skin onmy head hurt so much.

Thus, I needed to figure out something for renaissance. I desparately love the taped crownbraids of Morgan Donner, and I also love the hairnetted, braided hairstyles the series The Borgias full of.  That gave me the general idea... With a net, I can hide my "bald spot" (which is not really bald, but my hair is thinning). The evening before the event seemed like a good moment to make one, right? I dug around my ribbon and bead stash, and I do have a round, almost ball shaped lace pillow (a real antique, 120-140 years old french piece) that I could pin the ribbons I found to make the net with... I have it... somewhere... So more digging and I found the pillow, only there was a 16th / 17th century coif pinned on it waiting for some St Birgitta stitching... "Wait!" "What?" "What Coif?" you can ask..."We never heard about a coif!"... Oh, if you follow me on Instagram, you might have... That was a kind of quarantine project, I still have not finished. I did the embroidery, and I pinned it onto the lacepillow to have it sewn together with a decorative stitch, and left it there last summer. And through winter. And through this spring. And Early summer.... Now I either sew it, or take it down, and never finish the whole thing.

So, out comes the Morgan Donner video on the St. Birgita stitch and sewn up the coif.. 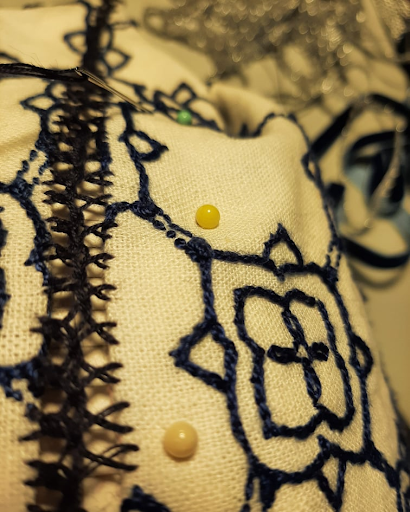 By the time I finished (the sewing up that is. The darn coif is still not near to being finished). It was past midnight... But when I do something I rearely do it halfway, or just to have ot passable...
My whole renaissance dress is going for the blue and silver way, so the net shouldn't be only blue, right? My hair is not shiny silver enough.Its good that in my stash not only ribbons abound, but silvery passementery kind of... stuff. 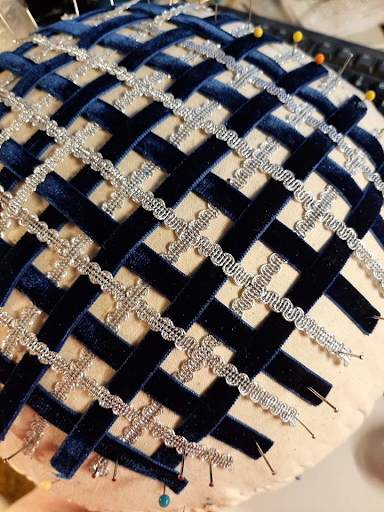 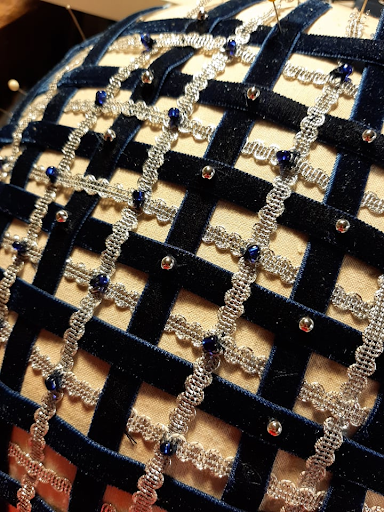 Blues for the silver crossings, silver for the blue crossings. Just to make my life simpler.
The whole thing got a blue silk tape endging and I've sen some little hooks so there will be something hairpins to grab on.
Now I had the general idea, ad the net but the actual carrying out was done by my teammate, Livia. 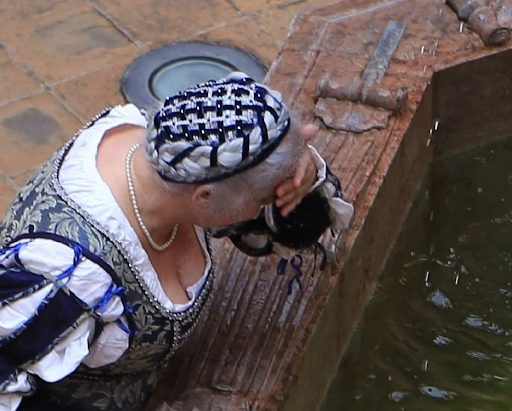 She combed back my hair, braided, then then pulled it through the base of the hairnet (if I knew this before, I would have made a space for that, but it worked this way too). then she divided the ponytail in two, braided the two sides, and pinned around the hairned. I had a braid, taped with a blue ribb, so she pinned that around the other braid. Now the thnning hair at the top of my head was hidden, and also the stress of the pinned braid falled to above the line, closer to my forehead, where it does not hurt. 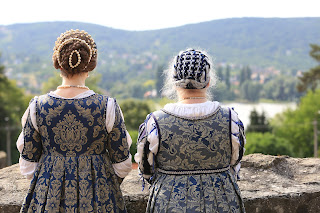 I have to admit... Its been quite a while I liked my hair so much.
Work photoes from my phone.
Hair photos: Norbert Varga
Posted by peony at 7:30 AM No comments:

Okay, thats it. I have been trying to write this post for a while now. I' deleted it a few times, because I didn't like the direction I've been going... and the last time, when I finally figured, that Even if I can't use this blog to talk about my renaissance dress, because you have seen it quite a few times by now, I might just talk about the hairnet I've made for the event.I even wrote the post, but then the whole draft dissapeared. Did I clicked on something I should not, did I pushed the machine to the wall and moved one of its cables, or did it decided itself that it won't cooperate, I don't know.  But I will take this as a sign, and give up trying.

So here comes the pictures without talk. From the middle of summer, The Visegrade Palace Games. 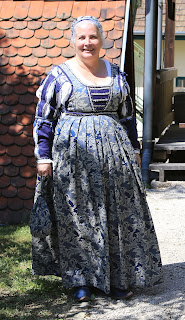 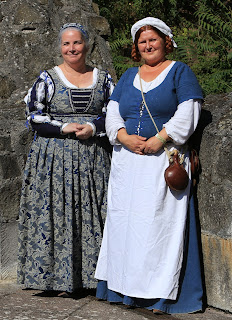 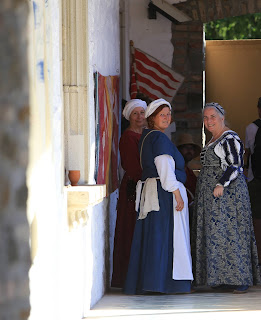 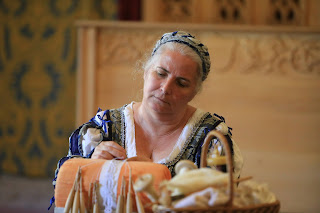 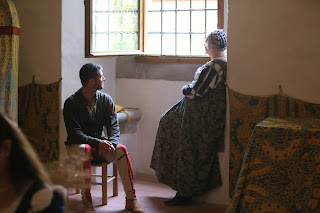 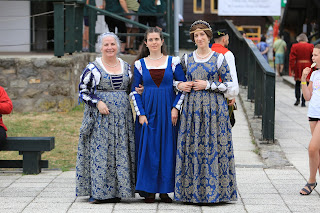 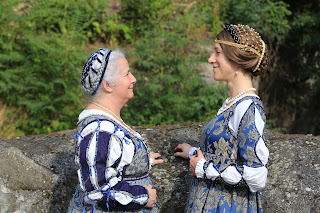 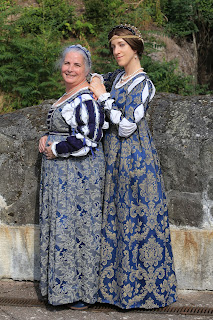 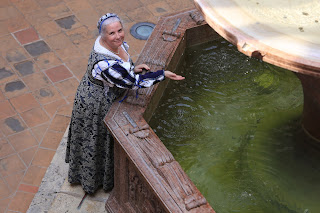 Photos: Norbert Varga
If you want to know more about the hair and the hairnet, let me know. I might come back to it and make a post about it.