The theory is that when a city has a certain amount of bikers... it has to take them seriously.
A twice a year event... but I will not go into details, which anyone can find here. I always try to go, as I am a major advocate of alternative transportation (mainly Public Transport, walking, roller-skating, and biking...
Besides it is great fun (except if one goes with P. which I did this year for Chris's sake. BAD IDEA. Will not do it again.).
But here are some pictures:
This is as it looked like when people started to arrive at the end of the route... When the last one arrived there was no place to sit down, not only in this part of the park, but all around. I really like the moment when a few tens of thousand of people raise their bikes to the sky. 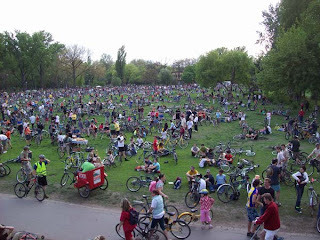 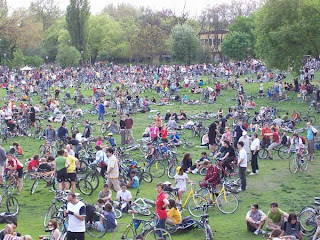 My son on his bike: 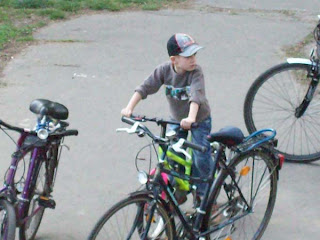 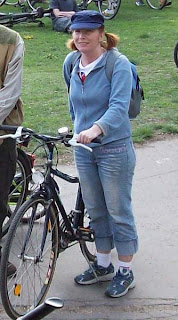 And these were also shot by said son... obviously since he was begging me to go with his dad he also wanted him in the pics... 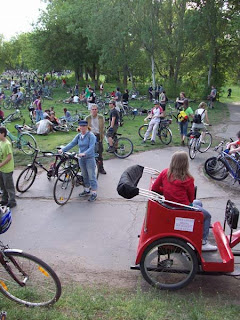 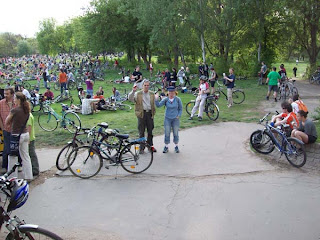 I do have to say for P. that he did helped me with my bike's tires (otherwise I wouldn't be able to go). But that was all the nice things I can say. Well that is just a reminder that I didn't left him for nothing... 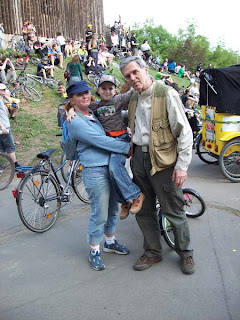 I promised, so here it is
What’s on TV? Sex and the City. Once again a show reruns. I missed it the first time around, but one episode a night is on one of the cable channels.Looking into it a bit on IMDB I realize I get the „light” version. I never thought I would like it, but -unlike Desparate Housewifes- I do. Fun stories, lovely settings, and Carrie wears the prettiest clothes.
Two thing bothers me though. One that except for SJP (who is absolutely beautiful) I don’t think the other women are…(beautiful that is). In fact I don’t think Samantha is sexy at all (but then that might be because I am not a man).
The second, is all that smoking..Admittedly I got off smoking easily by never smoking in my life. I simply don’t get smoking. And I think people who do smoke are stupid and weak. So seeing a butt hanging off Carrie’s mouth every scene does bother me.
New York is pretty far from here, so I have no idea if the scenes or stories, whatever are real. I do know it is only a story, so I don't moralize over how many men they have (or don't have) sex with. But finding your true mate is difficult anywhere.
What's reading? I just started The lollipop shoes by Joanne Harris, which is apparently the sequel to Chocolate. We’ll see.
What's cooking? Since My boy was with his father last week for a few days I haven’t cooked much… except for some foccacia. When I was baking bread I took off a piece of dough, formed some smaller buns, maybe a size of a smaller apple. Let them rest/rise a bit, then pulled them out to a flat circle, about ½ inch thick. Mix olive oil with Italian (or Provence) herbs, shredded garlic Smear the mixture on the small flat bread, Sprinkle with shredded Parmesan and bake in hot oven until lightly browned. I love it alone, or to go with salads, or minestrone soup.
What's knitting? As I already stated much starting and trying going on (along with lots of frogging) but nothing concrete… Currently on the needles are:
- beige/light blue socks –one is done the second should be started as I just got the replacement for the lost needles.
- Cream colored cabled socks- one is done, I am just passed the toes on the second (toe up)
- Bordeaux A line, bell sleeved sweater, done the body-parts just started the sleeves.
- Blue cotton tank top.
- Green lacey scarf/stole
- Orange wrap sweater –started once from the top, but frogged. Now started again for a bottom up, seamless raglan construction.

Nothing I am so excited about so I can’t put it down, but I am plowing on…
Posted by peony at 4:17 PM 1 comment:

I was about to edit the last post, but then I though what the heck.
A complaint-fest worth it's own post. Even if I know that P. knows about this blog...

I was talking to soon about P. Even though these days I only talk to him about Chris he always manages to make me feel... well you know that was one of the reasons I left him. I hate his negativity. And he acts like that toward his own son. He can't say anything positive when things going well, but he is just terrible when they don't. Poor kid. If something doesn't go as we wanted the last thing one needs just an other kick from where you expect support... There was this little competition of telling poems... Chris did learned his (poems), but couldn't managed "acting them out" enough to get a price. P. acted as it was a major tragedy. No, "next time it will go better", no "we will practice more", not even a "can't everybody win", nothing like that...
He just have no clue... All he learned from his parents was negativity, and he keeps pouring that out... I think I have my work cut out to neutralize all that damage.
Posted by peony at 4:32 PM No comments:

I have been a bad blogger… sorry for not writing for a while, but… It’s been a low and whining few weeks, and I rather shut up than whine…
To tell the truth I was a bit under the weather. Sometimes I do wonder if this mood swings mean depression or ever worst, but they are not so bad as to go to the dr, but bad enough to bother me.
Lots of things bother me, primarily the insecurities about today’s jobs. Half a year ago I was brave and just shrugged, saying with my English and other results I can always get a job “like this”… Seeing so many of my friends let go and seeing my ex colleagues struggle, I am not so sure anymore. Also the position I am working is the one that is usually the first to go. Of course I try to work hard, and try to show off my other skills (translating) and acquire new ones (excel, MEGA, etc), and hope for the best, but my mind is no way at ease.
Of course I am never at ease about P. either. Little picks and pricking are everyday occurrence. He never brings my son back in times. But probably things are better than with an average divorced couple, so I guess I shouldn’t be so annoyed.
Adding to this a bad (I mean BAD) case of PMS…
As for knitting… After finishing the tangled yoke cardigan I didn’t really knew what to do… I started this, I cast on for that, and then just frogging this, and frogging that…
Things seems to get better, the weather is turning not only spring- but summer-like. Bought some clothes (why shopping is so good for the female soul?). Had a couple of discussions with my managers, and had a couple of days off due to spring-brake at Chris’s school. I took my boy to roller-skate; bought him candy-floss (oh horror of horrors…LOL), and we managed to get stuck under some sunroof of a small buffet because of a huge thunderstorm complete with hailstorm…

So here I am today. Decided to try and not worry about my job. It is out of my hands. I did my best, talked to my managers, and did a couple of translation both of them with very good feedback.
I am going on with my knitting. Decided that even if it seems I frog more than I used to, but this is not because I am getting worst, but because I let go of less and less mistakes. If I see a stitch off in a lace instead of just getting around it/fudging it, I am more and more inclined to go back until I can fix it.
Also decided to loose a bit of weight, do some sports, even if it is walking around more, get a bit of color from tanning bed (the strong light and warmth does wonders for the soul). And get back into reading more on “The Secret” the Law Of Attraction and the like. I know it can work, I did “attracted” the TV set and some other stuff… It just needs some concentration.

Ok, enough of me for today. The next post will be a what’s up. Unless a miracle happens and I manage to finish some knitting…
Posted by peony at 12:31 PM 3 comments: