In search of the yellow road (pictures)

About a year ago we had to drive from Budapest to a nearby town called Páty. As we turned a corner, the trees along the road were „such” yellow… The view hit me, it literally took my breath away, I had to gasp for air. We’ve been running late and could not stop to take pictures, but the vison stayed in my mind ever since. I wanted to see it this year, do some photoes, and last week we drove there. It was not „that” color. Maybe the sun was shining differently. maybe we were there two days later or two days earlier, who knows. Maybe it was a special tear in time and space where I could look into another world. 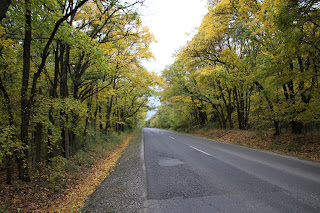 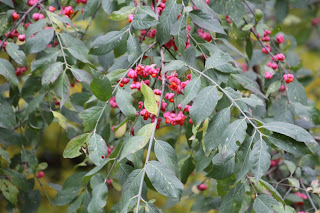 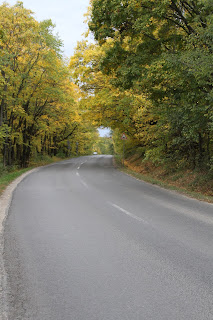 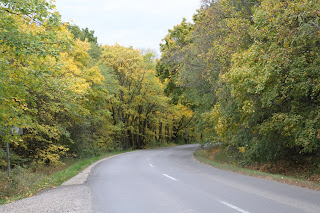 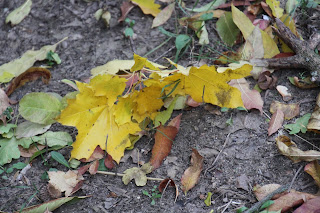 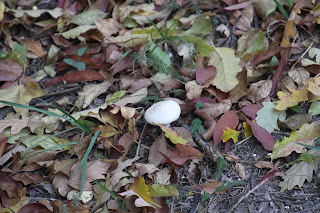 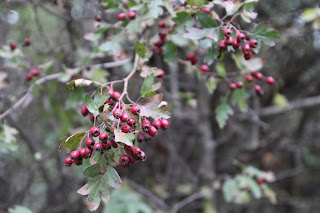 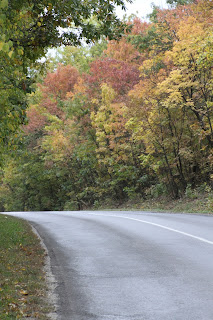 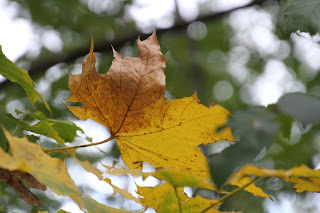 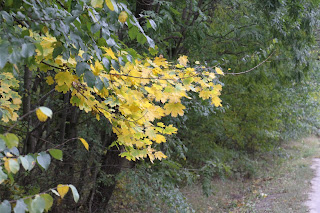 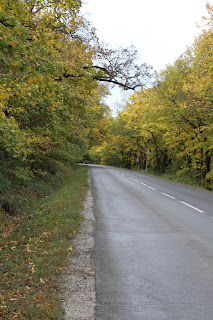 The pictures are from this year, All this does not mean it is not beautiful Just differently so.
Posted by peony at 1:45 PM No comments:

And while we are at the subject of the red dress, shall we talk about the hat I am wearing with it? Especially, because the poppies on the hat, because those were what kind of gave a kick of the gathering snowball to became an avalanche... umm, so they were the thing, that held together bits of ideas floating around my head to a concept. Also especially because I promised to show how it was made. Also especially, because on instagram the Fallforcostume photochallenge is going on, and the topic for today is hats and hair, and this is as good day as any to post about this hat finally.

So we've all seen those pretty flat hats in films set in the 18th century from Outlander to Poldark. Their distinguishing mark there very flat top and rather wide brim.

However, they are not available readily. Yes, there is a few sold in E-bay, or Etsy, but the latest upset with messing with the postal services (its not only one has to pay a ton for shipping, AND local taxes, and EU taxes, but the Hungarian mailservice will not take your package to your house (you have to go to the office, etc) AND pay them a service fee (for a service you already paid), and still not sure you can get the item.

BUT there are a ton of tutorials on the net about refashioning existing hats, so here we are.

Actually, I meant this as a trial piece, with theintention of trying it more, if íi was succesful.

I bought a hat in one of the cheap chinese stores, and went from there. Forgot to make a photo before I've cut it, but this is how it looked. 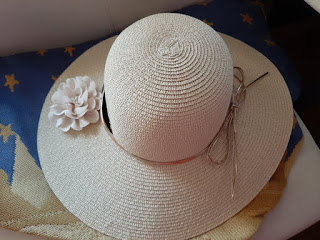 To start I took off the decoration, and cut out the crown. 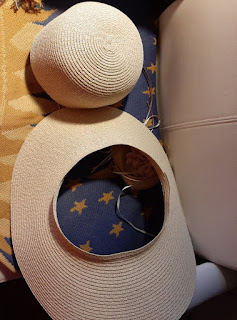 Wet the crown to soften it, pushed a tin box into the crown (uups, no picture of that old tinbox, but I found a smallish one, that was the perfect size), covered the whole thing with a wet towel, and started to steam it with a steam iron. 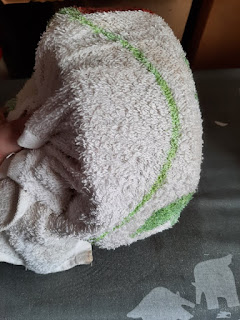 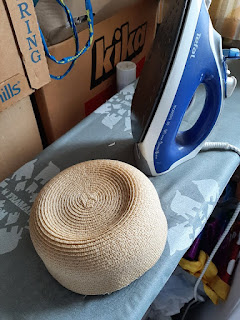 Then after further steaming on that box, it looked like this. 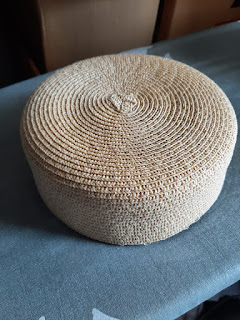 It was flat now, but still way to tall, so I have cut off more of it from the bottom. 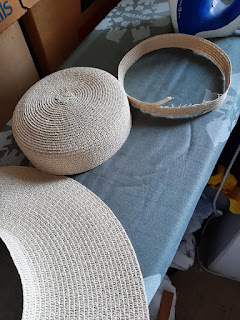 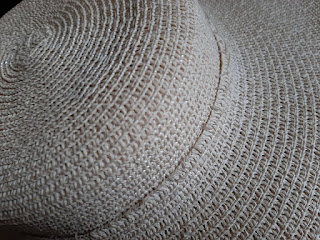 And sew it together from the outside, and from the inside of as well. 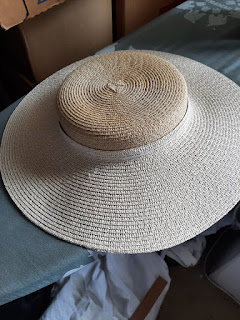 Right after sewing it up, the top is a different color, because it was still wet from the steaming. 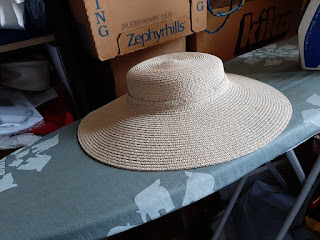 When it was dry and all the same color, I've set out to line the interiour, and added some wide silk ribbon to be able to tie the hat. 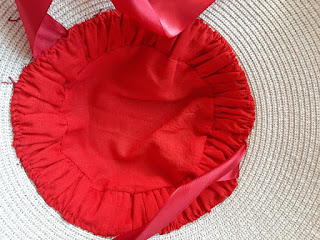 I used the same ribbon pleated it with the help of a fork, and sewn it onto the hat to cover up where I've cut and sewn up up the crown. 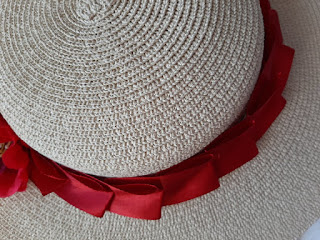 Decorated with my poppies and... Oh well. Looking at the poppies, I had this fleeting thought, how some ostrich feathers would look on the hat. Delicious, right? Did I had red ostrich feathers? Of course not (I do have several blue ones though, as most of my historical dresses ARE actually blue right?) Now, where can I buy ostrich feathers, like three days before the event I want to wear it on? Of course E-bay is full of them, but see, my above rant about the current state of the Hungarian Post. I looked at several webshops, but neither promised timely shipping. Then I asked one of my crafty groups on FB, and hurray, they had the answer. The store, where I buy the bonings to my stays, corsets, crinolins, and whatnot. I was up to here with work, my dress was not finished, and there was raining cats and dogs, but if anything, I am obstinate and hard headed, and I wanted red ostrich feathers for my hat. Of course I rushed out in the biggest downpour of the year, my shoes got soaked as soon as I stepped of the bus, but I got those darned red ostrich feathers. 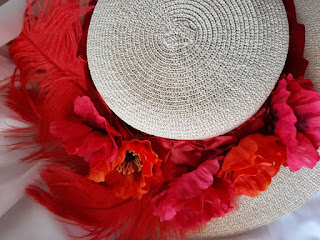 And so I had my Poppy Hat, with ostrich feathers. 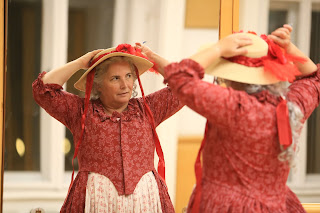 Of course, such a big hat would not stay on my hat by itself, I have to give it some help in  the form of hat pins, but who cares. It is pretty. 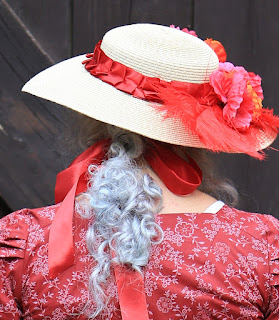 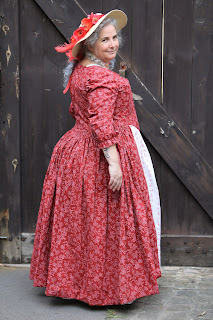