Blue waves on the summit

For a few years now I wante a shawl or stole in shades of blue. Back then i wanted to knit a clapotis so I got this yarn with strong contrasts, but when I started knitting it it just pooled all wrong... I have a hard time saying this, because I am really tolerant toward knitting, but it was ugly. Look: 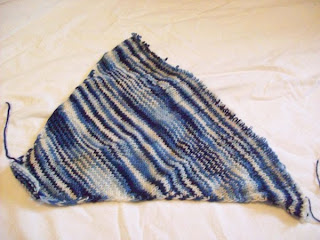 So the yarn went into detention for years... sometimes it got into my hands somehow, and I kept thinking what could I make from it, how can I save it. It is a single ply yarn from Uruguay, which probably would make it too fragile for socks (besides the 200 gramms was too much for that). Up until the moment when I saw Ági's version of the Summit from a similar yarn. By then I had my silk summit way under way on the needles, but the thought didn't let my mind to rest, and not long after I finished the silk one I cast on for the second one.
For the longest time it was my takeout knitting, I knitted on it in playground waiting in offices, cafes, in the club...
After the first few repeat I could see it is much better match for the yarn, instead of the chaos, it brings the colors toogether in a nice way. 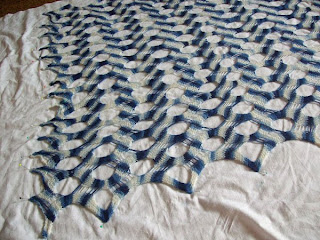 Because it was only a take away project it took me quite a while to finish it, but I did. 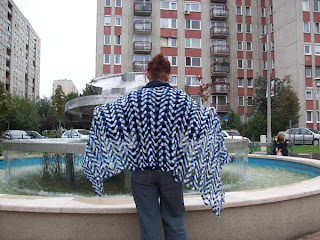 The size is generous, just as I like my shawls. I can wrap myslef in it 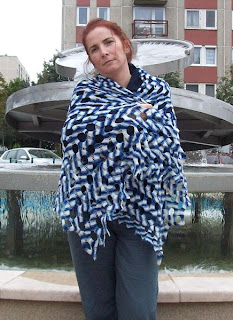 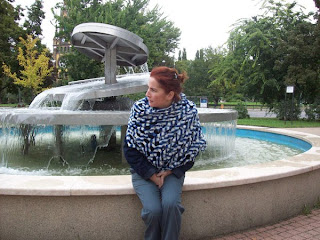 But I can still use it as a scarf 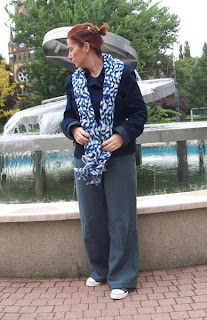 Or scrunch it up in my neck 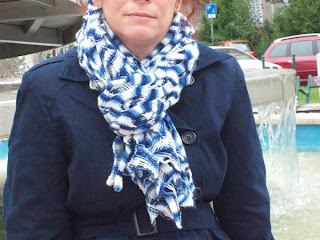 I have awful memories of wearing the silk one, as I was wearing it the first time when I was laid off in the bank, which kind of make me not want to wear it... which is a shame because it is a great shawl, a great pattern. Here is to this one bringing me more luck :-)
Posted by peony at 12:00 PM 2 comments:

And don't really know what to knit next. I want to do so many things at once...
But all I can show you is a weekend worth of swatches, starting this, stopping that... Details in the club's blog! I can't emphasize enough that the meeting is open to every crafter who likes company :-)
Posted by peony at 9:04 PM No comments:

There are quite a few stuff I have a "thing" about... tweed yarn is one of them. At my last time in the second hand shop there was 300 gramms of this very colorful mostly wool and viscose yarn, obviously I just had to have it, even if I had no idea what to do with it... but leafing through one of the fresher Sabrina magazines I soon figured it out. Of course my german didn't improved in the last few weeks, so I had to go by the pictures and the charts. 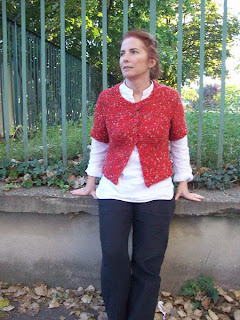 Knit sideways with a cabled edge, which shows up better in real life than in the pictures. 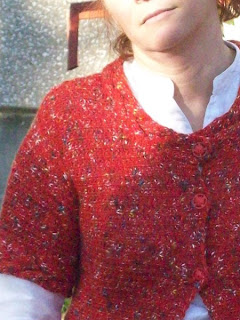 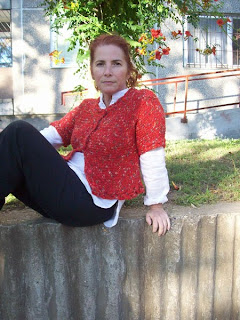 It took me about five days to knit this. 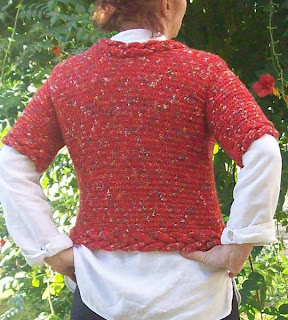 With shopping for yarn in those second hand shops is that it is so rare to find enough for a full sweater. Often there is something that it would be a shame to leave it there, but then I keep wondeing what to do with it. So was the case with the beige cotton ribbon yarn I found earlier this month. But then the weather turning cold and the recent succes with the turqoise shrug how useful these little things can be. Worn over tank tops, sleevless dresses in the summer, over long sleeved stuff in the winter. Once again after endless leafing through mags and ravelry pages I decided to make up a pattern for myself. Here is the end result. 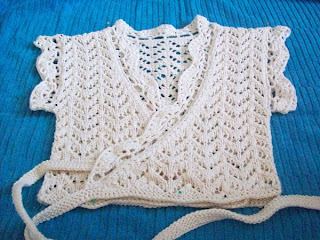 Sinmple lace pattern for the body from the matte pure cotton yarn and crocheted edge from the shiny that had rayon in it. 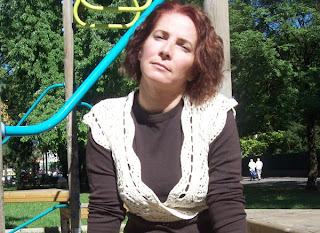 For the photoshoot I wore it over a brown long sleeved T shirt to show the pattern better. 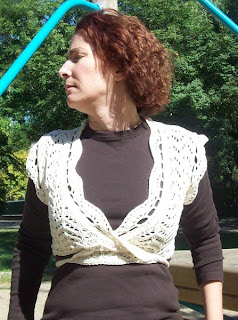 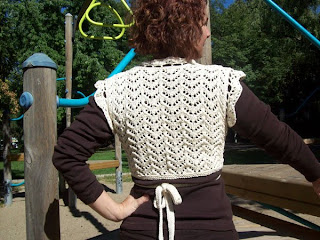