For about a year now I have the yarn for a sweater I promised to knit for a friend... However I never knitted a full sweater out of Lima, nor did I knit a sweater for her, and combined the two above conition kind of makes me a bit nervous...  though a well sized swatch could solve the problem... 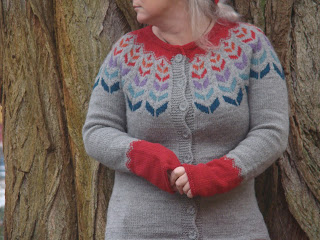 Also, ever sice DROPS came out with its fall collection I wanted to knit the Joyride sweater. The DROPS Alpaca party sales gave me the perfect opportunity to do both at the same time. I exchanged a few words with jelloknits on Ravelry, who knitted the sweater version out of Lima, who told me that the gauge of Karisma and Lima is close enough so I do not have to recalculate the whole thing, just follow the pattern. Hurray, that is what I did... almost. I wouldn't be me, if I completely leave akove a pattern, now, would I? Colors are slightly changed, partly because the slightly different selection of Lime, partly due to my preferences. Red instead of dark rose for the edges, and no yellow, only orange. 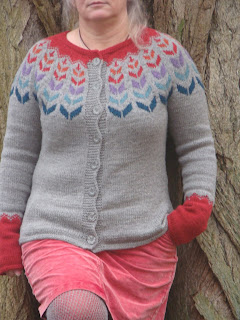 However, the changes are small, and yet again due to my preferences and not because of the inadquacies of the pattern I found it strange that in the pattern the body is knitted straight up, only increase for breast. I like a more defined waistline, so I started with more stitches, decreased at the sides, until I got to the amount of stitches at the waist line I was supposed to beginn with and then increased according to the pattern, only a tiny it faster rate (less rows between increases). 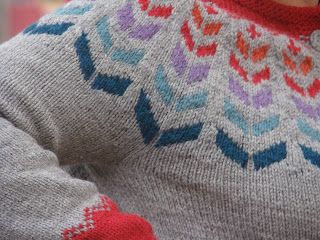 The other thing I changed the sleeve edges. I loved the small patterning at the sleeves, however wide cuffs are grown onto me, they kind of became my trademarks. So I knitted the red edging longer and did the transition patter after about 15 cm-s. 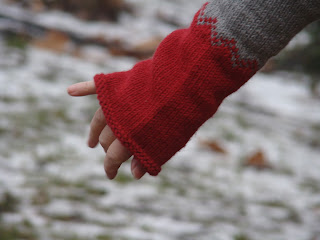 What caused me a bit of headache was what to do with the contrast colored yarn that is not used on the button bands and the at the top, where the photo crearly shows that the red (rose in the original) is brought out to the edge, but about the how o the pattern is very vague (OK they do not mention anything about that LOL), As for the colors at the pattern I brought them out to the last stitch before the button bnd, twisted the base and the contrast and thenknitted with them back. For the upper edge (close to the neckline) I even wrote to the Design Team (there is a certain advantages for being a translator for their pattern) and they suggested to kit the button band separately, and sew it on. I on the other hand knitted as before (twisting the yarns and knitting the band with gray) until there was pattern, and with the red afterwards. 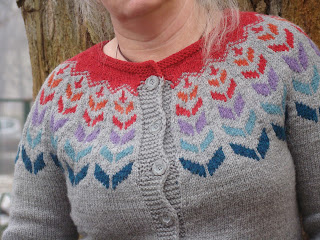 The last change was knitting the neck edging with garter stich, as rolling edges are really not my thing. As an aftertought (because we are all smater afterwards, aren't we) if I would knit this again, I would knit the body without the buttonbands, and pickup the stitches and knit it on afterwards. I would eliminate the problem of what to do with the yarn ends, and it would make easer to space the buttonholes a lot easier. All in all it is a lovely pattern and if anybody is looking for a first fair isle sweater project this would be a great candidate. Because it uses slightly thicker yarn, it knits up faster, the patterning is easy enough to do it even back and forth. 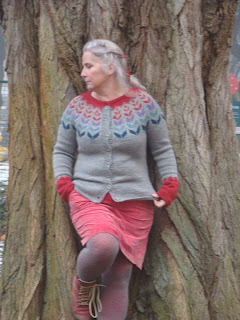 And the details:
Pattern: DROPS Joyride
Yarn: DROPS Lime (have I mentioned, just how much I love Lima? I loved its big siter Nepal too, but the slightly thinner Lima is just as great.
Needles: 3 mm for garter stitch, 3.5 mm for stockinett and 4 mm for the patterning.
Photoes: Cristopher Laurent Deli.
Posted by peony at 2:30 PM 1 comment:

As I already told you here here here and here too (in other words, kind of in every January for the last few years, the story of the new year's good luck sweater, for which the Idea I got from my friend Angela 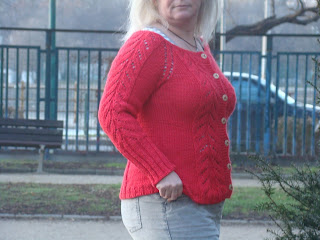 In fact I told the story so many times, not only here on teh blog, but in different Facebook-groups as well, that so many liked the idea, that I made a group for it, and what is more the group has a lively membership and discussion for now (to my biggest surprise and happiness).
In essence we start the new year as we mean to go on, right? In my (our) case that means a lot of knitting. The first thing I do in the new year is to start a new sweater, and so untypical for me, I do not knit other things until it is done. However circumstances (shcool, exams, thesis, other jobs and whatnot) caused me being way behind with my DROPS translations, So much that on December 31sth after working for about 16-18 hours I was uploading the last patterns around 11.40 PM... After that I could hardly keep my eyes open, much less count to as many as it needed to cast on anythig, especially a sweater.
So on New Years day I started it early afternoon... then saying "I deserve a bit of rest" I managed to knit a lot, in a good speed and break my own (a cardigan in 4 days) record. Finished in 3 days and it was already blocking on 4th of january aftenoon. 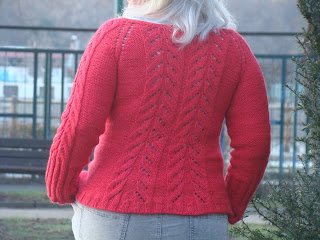 I was thinking what should I make as for this new-year's project. The color was fixed, "good-luck red". I had something on mind, as I was planning to do a dark, blackish-red version of the Lion Neck cardigan, but just a couple of days before I found a similar style sweater from cashmeere in a second hand shop, which I simply could not leave ther. I needed to find something else. I went through the DROPS database, I even asked (and got) help from the group, I even bought, on a sudden crazy moment yarn for an other red and white version of the Nordic Summer, still--- One of my new years plan/hopes that with finishing shcool I want to spend more time and energy on creative/crafty stuff, even return to designing, so I put together something from my head. 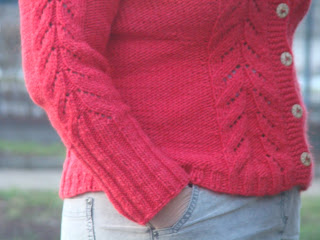 I had a fixed amount of yarn (400 gramms) and the the design took that into consideration. Done it top-down, because if I knit the shoulder and the sleeves, then I can knit the body as long as I want (as long as I ,y yarn last). Lace make it looser and the yarn go further, it can be also blocked better, The pattern I used is a version of a pattern from a sock.knitting book, I made it a stitch wider and mirrored it and put the two halves along each other. For waist shaping instead of teh sides I decreased and increased right next to the lace, and to emphasize the A line shape I increased some stitches between teh lace panels as well. . 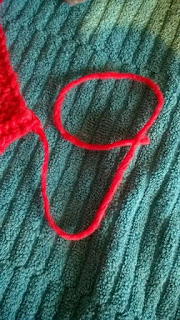 If I would have one more ball I would have knitted it somewhat longet, but this way I ended up with about 15 cm to spare after binding off.
And what DaVinci has to do with all this? I watched the entire third season while knitting this. Crazy man, but a great man. 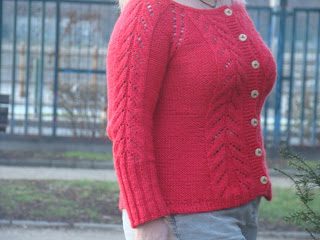