That is what I am…
Its been long time coming.
Actually the desire to weave is even longer than that of to spin. 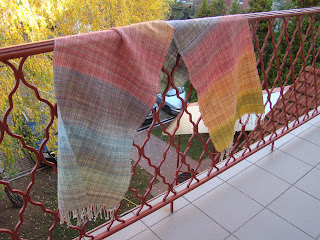 If I look old photos of the big yearly craft fair I always find a bunch on which I am standing there with an open mouth staring of a weaving loom, or frame.
The truth is, that since my early childhood I am fascinated by textiles and clothing. Most probably I inherited it with my genes, as I have textile crafters in both sides of my family tree in every level as far as I can see. Not only that I handed some of it down to my boy, who is also fascinated by weaving looms, I’ve never seen him sitting as long in one place when he did this.
This and that  (like knitting, sewing, and the unavailability of a weaving loom) steered me away, but the wish was always there.
Last year I almost went, but some organizing mishap happened, and at the last moment my place was cancelled. I was unreasonably angry, and interestingly even more unreasonably hurt, but I tried to tell myself, that the universe wants to tell me something, so I probably shouldn’t push it…
But…
This year, I was making sure to be there. I went really prepared, I figured out what I want to weave, how I want to do it, and with what material 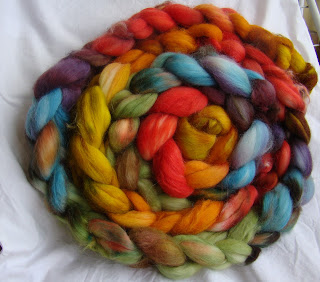 According to this plan I dyed up some 200-250 grams of wool, which is most probably alpaca. (Don’t ask. I am not that organized when it comes to storage. The bag, which had the fiber, had no label. But the feel, the touch of the fiber, its silkiness, how it behaved while and after dying, how it took (or did not take) up the dye, the way it spun up, all had the characteristics of the alpaca fibers. 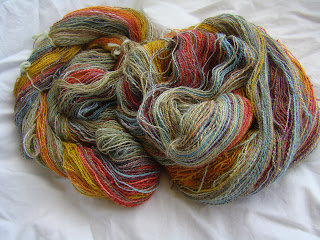 Then I spun it up, to about 1200 meters of two ply, with kind of a long draw.
Then the day before I went spinning I wondered out and checked the looms, the warps and selected which one I want to weave with. 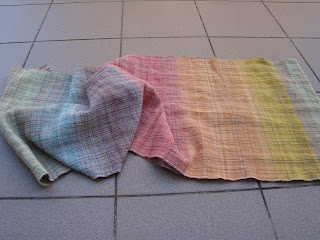 And next day we were standing there with my friend, anxiously awaiting the day to start.
And when it did, when it did. 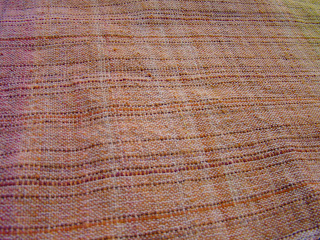 I’ve tried to describe the experience, but it is so hard to put it into words. It was mystical. The way the warp and the weft crossed. The movements. The colors. The rhythm. The everything.
Previously I was afraid I will find it boring (yeah, like I get bored of knitting or spinning), but no, not at al. With the movements of my body, my mind relaxed, and I could let go of things and thoughts. 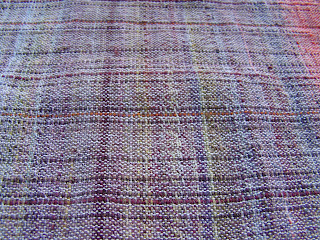 I enjoyed how the yarn worked up. Of course it was largely because of the handdyed, handspun yarn, with its odd spots of colors, its slight unevenness, and the way one color gave way to the next. I was happy that I was adamant and reloaded the spools, so the colors followed each other in the right order. The weaving itself is rather simple, and the edges have a lot of way to improve… Even so I think it is not bad for a first attempt.
I have to say thanks to Zsóka Sáringer  and Angela Csapó for this miracle.
And now let me go and search for a suitable and affordable weaving loom.
Posted by peony at 7:35 PM 4 comments:

I've knitted this pattern before. Twice. I must like it. A lot. 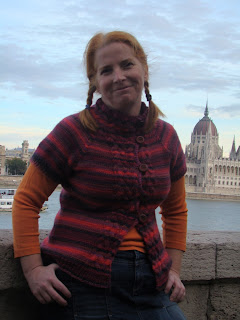 This time I started with the number of stitches for the smaller size because I wanted a neck that more standing up. Also I've put the front opening to the middle, so now it is assimetric only as much as the buttons fall to the side. Added a tiny cable to the ragline lines. And the button holes are crocheted. 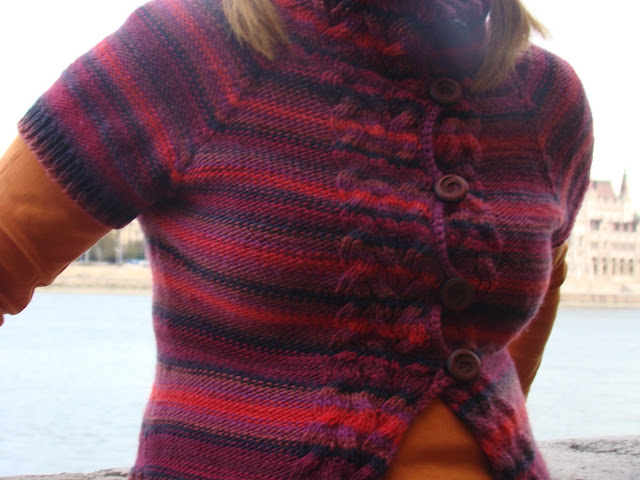 ﻿
As with my other two I love it to pieces. Even with the yarn being a bit dissaponting. In the skein it looked a lot more reddish, bordeaux-ish, and the knitted one is more purplish, and the blacks are jumping out way too much 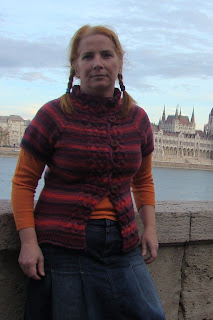 Sorry for the dark pictures...the weather is not cooperating well lately...
﻿
Posted by peony at 8:31 PM No comments:

Remember the craft fair in august? For four days I was spinning there, and here is what I had on my spindle. 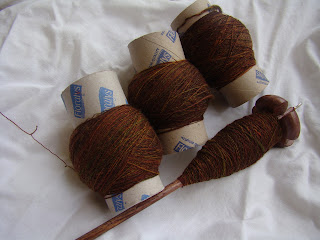 The wool originally was called "walk in the woods": 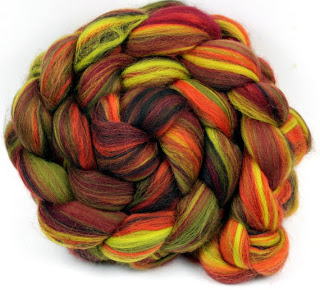 But in reality it had a rather huntery color, which I was spinning up in the castle...(the prince didn't come, but that's an other matter).﻿
﻿ 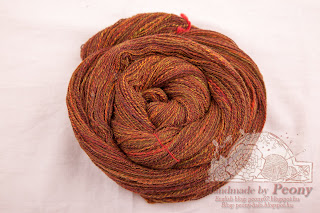 It took me about four day to spin the 100 grams on my spindle.Because of the circumstances, walking around (yes, I did spin walking around), talking to people, regurarly putting it down, and picking it up again, it is not as even and consistent as it should be, but what the heck. 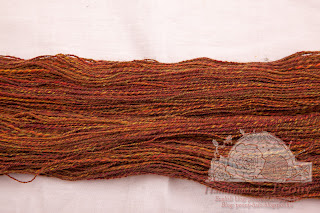 As I say, if I want perfectly even and consistent yarn I would go to the store and pick up a skein from the shelf.﻿
And at the end I ended up about 660 meters of two ply. 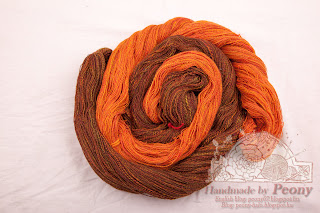 And in the halloween-y mood, paired up with the orangey yarn spun from a very similar wool...
Finished yarn photos by Tamas Rigo/Veronika Nyerges
Posted by peony at 9:32 PM No comments: