Weekly spinning, or the masochist and her guest

Its been HOT around here. I do hate winter and love summer and warm weather ever so heartily, but this was too much even for me. Of course it didn't help, that instead of an airconditioned office I had to spend my days in a badly insulated east-west oriented top floor apartment, in one of those russian types of prefabricated buildings eastern Europe is so full of. The temperature in the kitchen was around 36.6 C at six o' clock in the morning, and things just got worst from there. For weeks I made a sport out of how to survive without turning on the oven, or even the smallest light on the gas stove.
Then comes a friend to look at my stash, my spinning wheel, try out the spindles... and starts to nag me at 9AM that "llleeetts dye some wooooolll". NO. Cathegorically NO. That means turning on the oven for at least 40 minutes. Definetly not. I am not feeling that suicidal.
But my guest wouldn't let up. "Dye some wool, I wanna look how this white stuff turns into those colored fluff you are spinning"
Now, as a mom of an 11 year old kid, I have quite an experience in saying no, and let nagging passmy ear, but boy, my guest was persistent. Around 5 Pm when in the kitchen was "only 33 celsius she wore me out. 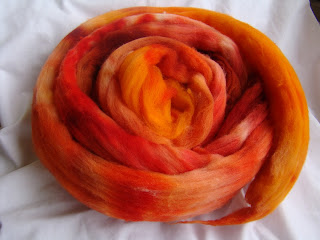 Fiberglass pan-take out, wool dug out of stash, lefover paint poured over, oven turned on...then running cryingunder the cold shower.Finally taking some pics of the result: 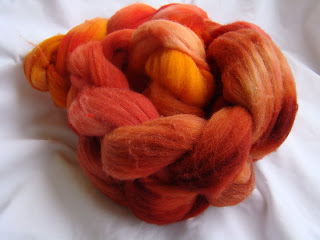 Then, as it wasn't enough I felt brave enough to experiment a little. 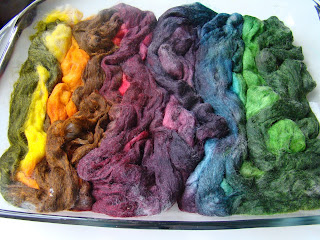 Used to different type of wool, with the same dye mixtures. 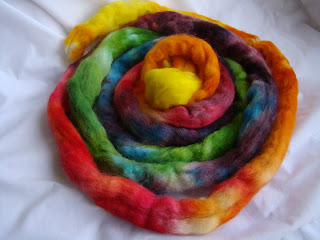 The first was some white corriedale. 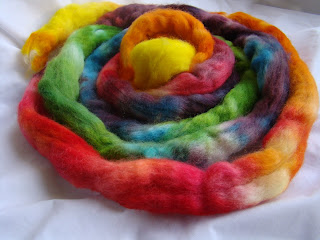 I ordered the corriedale, because I wanted to try out different, lesser known wool types as well. 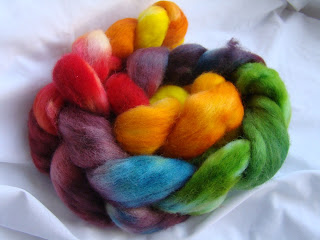 And using some heathery grey merino as a base  is my favorite. 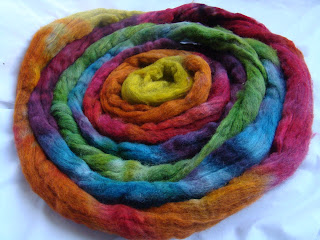 It gives such an interesting depth to colors. 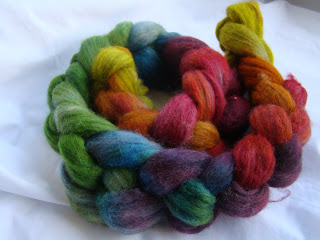 Here, you can see the two variations side by side.﻿ 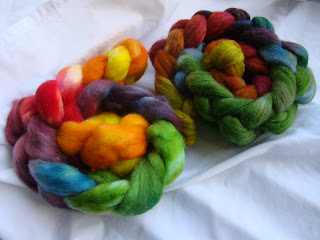 And just to have some spinning as well. I had a bit of orange/brown dyed wool, came to me as a smaple present with one of my spindles. I used it to show my guest how the spinning wheel works.﻿ 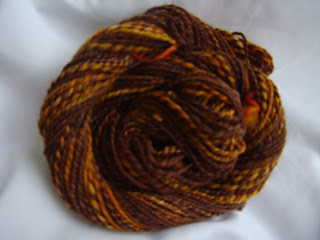