My favorite textile store that is... after almost two month, it is a tiny-tiny shade of normality...
Last week when I've had an appointment with a beautician, and she cancelled, I literally cried  (I might make a list that make me cry these last weeks. Or not. However, there were some real strange reasons there... ). I mean I am so hungry to have contact with people other than N and Chris...I mean I love them both to pieces, and if I can only talk to two people for he rest of my life, they would be those two, but still...
Anyhow, I still ventured into the city, but downtown was so empty it was rather disheartening.
But this week it seems some stores had enough and reopening, bit by bit....
Like the "cheapo fabroc store"née I Love Textil, which do sells a lot of sh*** I mean stuff that is no value to me, but sometimes I do find trasures there... Just like now. 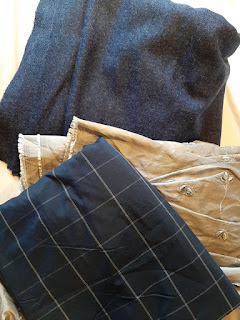 Its not that I need or have space for them, but still...
So, here is hoping that things might just turn for the better... one day.
Posted by peony at 7:30 AM No comments:

of something new... As if I needed more hobbies... even though thi sis not entirely new, but I haven't done it in decades... 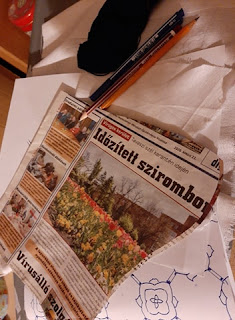 I finally got around and folded and put away my fabric stash... at least most of it.
I have a fairly old, retro, modular office...whatever they call it. It has modules for storing clothes, but it also has modules with drawer, and shelves. It probably sat in an office of the old socialist party. PJ got it, when he first rented a flat, about some 30 years ago. The furniture he'd gotten used back then,came from one of the party headquartes. (The last of teh chairs from there gave in pretty lately, it was thrown away in the last spring clean up). There must have been sized to a standard wall, because if it is all put up, it is exactly the size of the wall between my bedroom and the sewing room.... come to think of it, the second wife of my father had exactly the same set, exactly on that wall for a while (yeah, this flat has its own story, maybe I tell it one day). However that set had been around here, put up here and there, turned this was and on the other, the last I moved it was when after PJ left and 6 piecesout of the 8 had been put up in the small room that used to be my sewing room / storage. Now the shelved one stayed there, providing storage for Chris now, and the two wadrobe functioned was moved in the old/new sewing room. I asked N to put in some shelves, so teh fabric I put in would be more accessible, I wouldn't have to take our all, if I want something from teh bottom. This also gave me the opportunity to make "collections" and put fabrics with similar uses in one heap.
Since I do have (yes an awful lot of yarn, but also) an awful lot of fabric, I needed to figure out how to store them the most possible efficient way. The chest (let's call it chest) is not big enough to put in fabric rolls, so I measured the shelves, and spent literally weeks and weeks of folding up the fabrics to size. some I had washed to have it shrink if it wants to, those needed ironing as well.
I do not have enough space for a proper table, I worked on the floor. That put a considerable strain on my back and waist, but now it is done, and I guess it was worth ot. there you go... 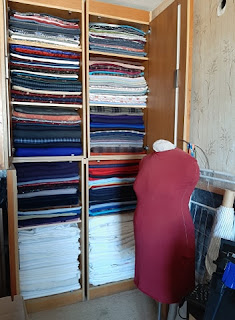 These are the taffetas and above the fabric that are suitable for stays, corsets and the like. 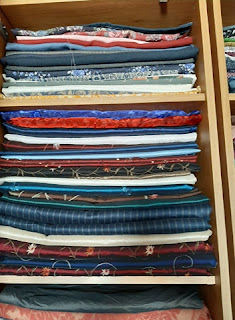 Velvets, some of it for "civil"uses, most of them are for historical items. 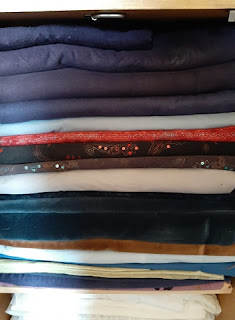 Small prints on cotton, for regency, early victorian and maybe late 19th century stuff... at the top are some knitted fabrics for modern stuff- 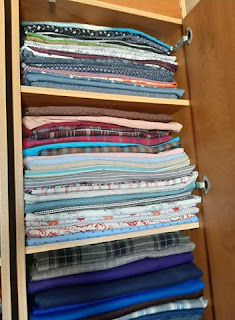 Ahh the whites... these are different white stuf, for historical underwear, some cotton, some linen. Love them all. On the other side of the chest (no separate pictures, but you can see teh bottomright shelf on the top picture) there are similar amount of white fabrics for modern clothes... I do love white clothes, don't I? 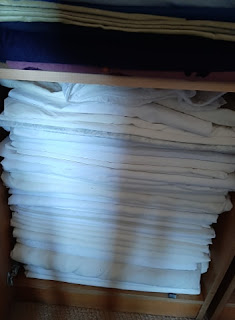 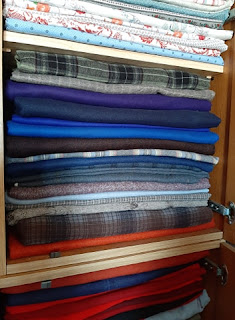 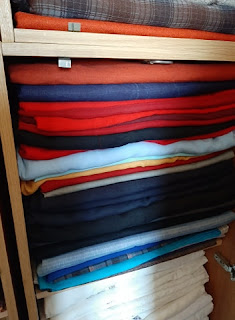 And the stuff that I just could not stuff in its shelves. Some wool, some taffeta, some brocade, but all for historical stuff... 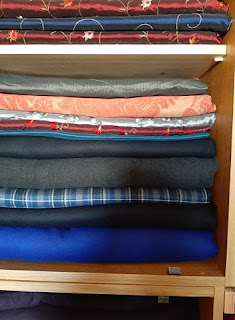 And no, this is not all... I have about this much more, on the other side of the room, in boxes, but these are the things that -hopefully- will use the most in the near future.
The lesson is, that when you do fold the stuff flat, you can really stuff more things in. In this place there is about 12 huge moving box (the type you can buy in Ikea, or Kika in my case), and what had been lying around in bags.... Now I can see what I have, and go ahead and sew something.