In the name of getting back my crafting mojo, I was dyeing yarn (and some wool) again.
Here are some of the yarns 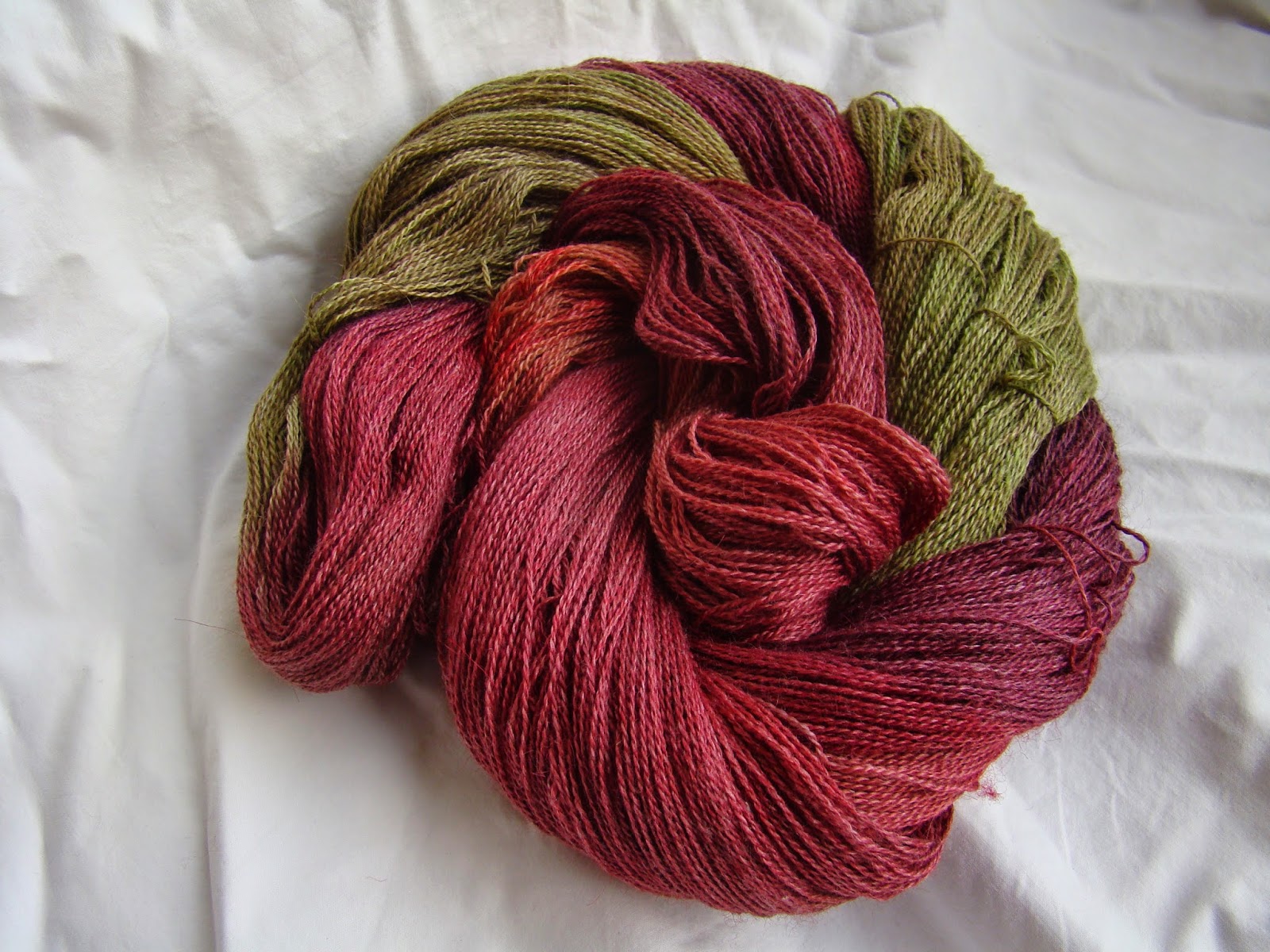 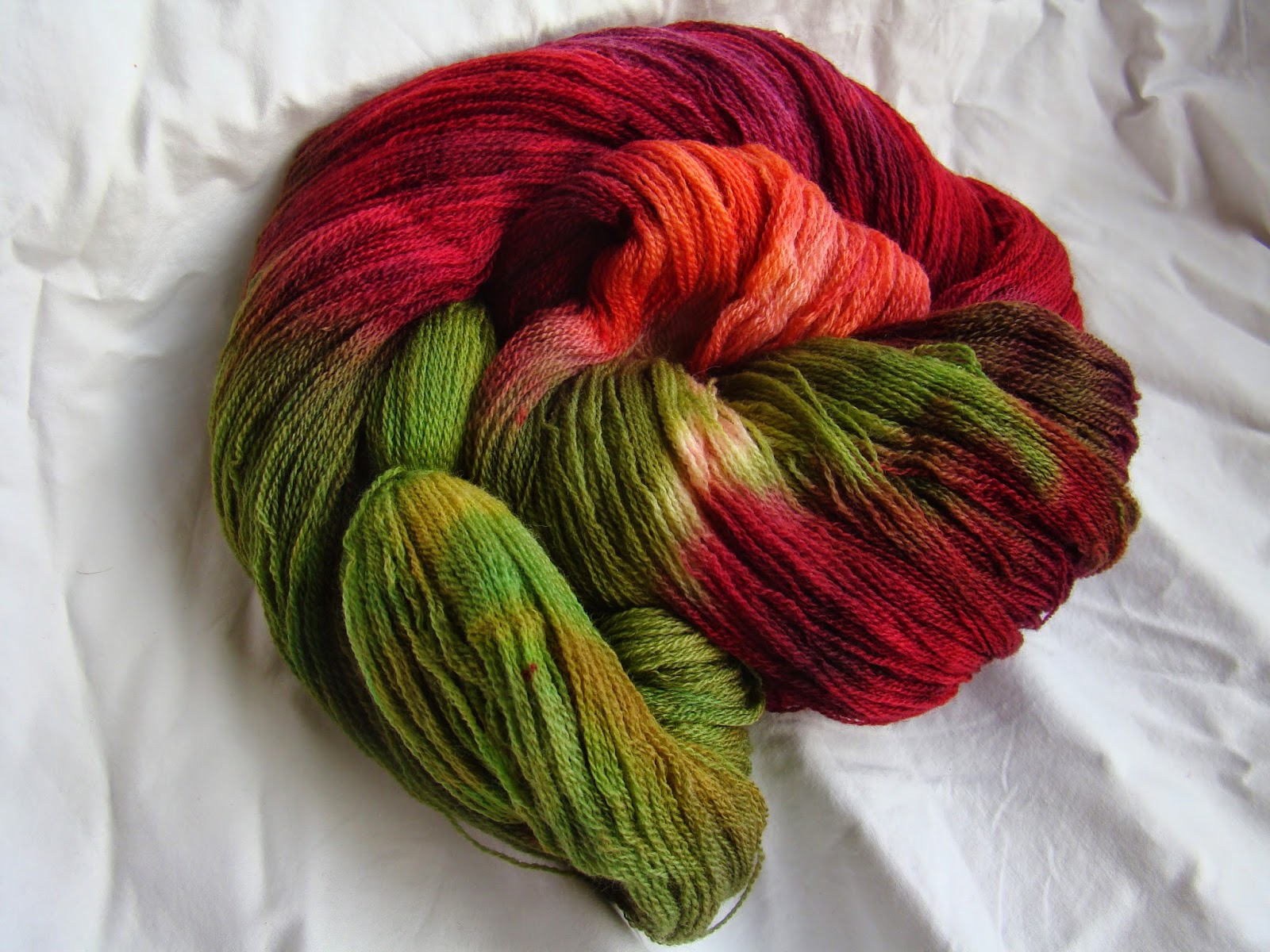 And on pure wool lace yarn. 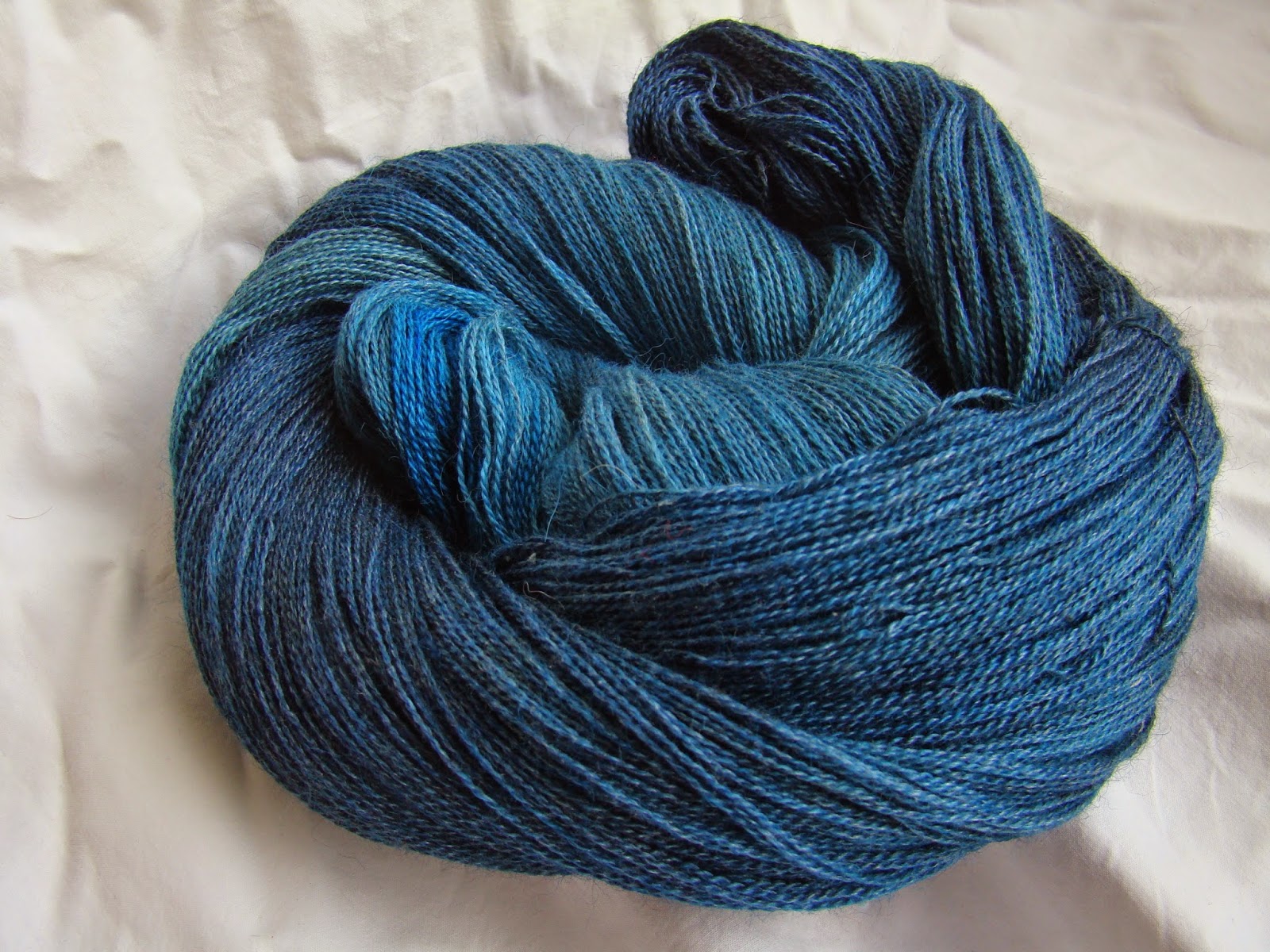 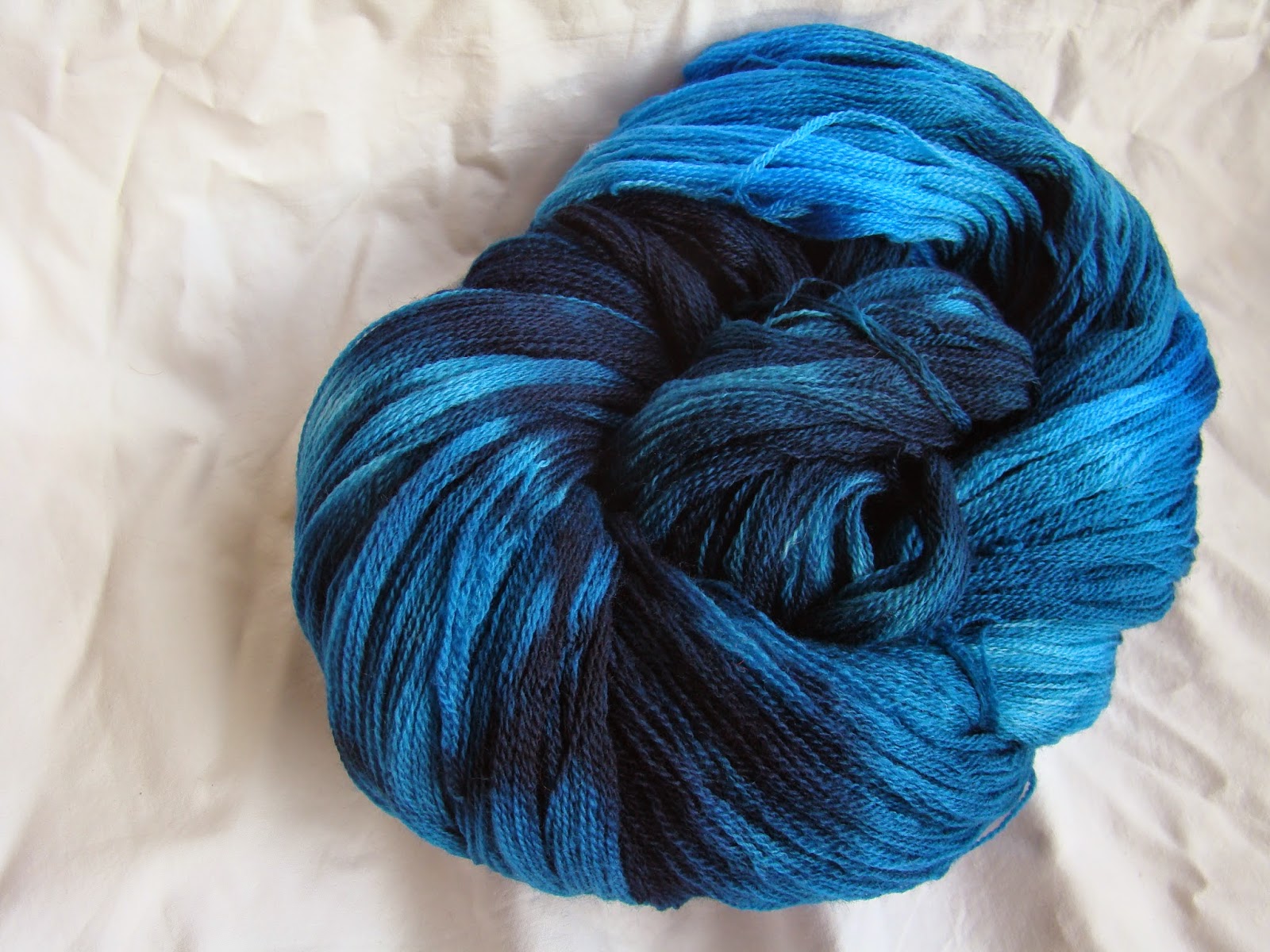 And all kinds of blues on pure wool lace... 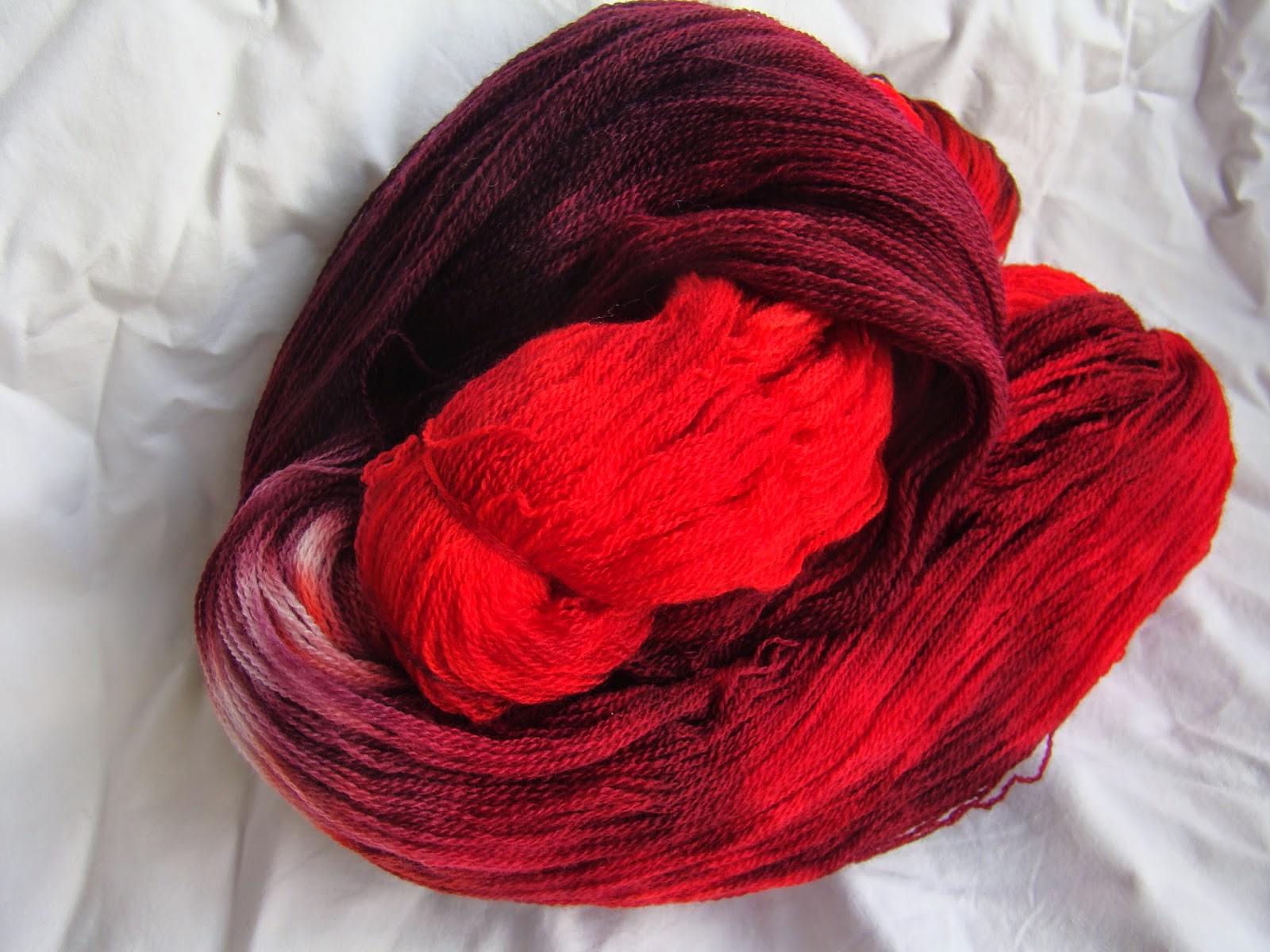 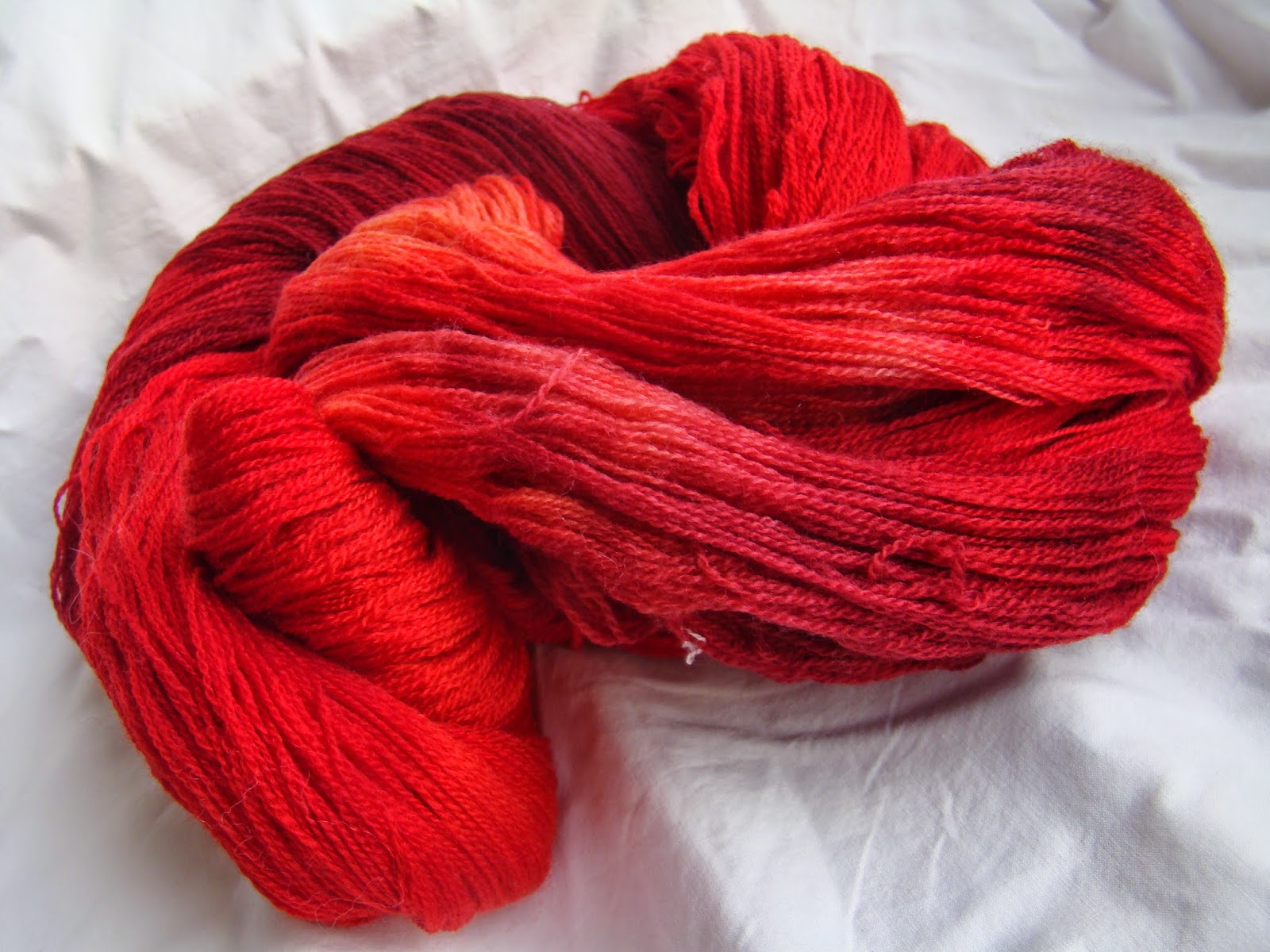 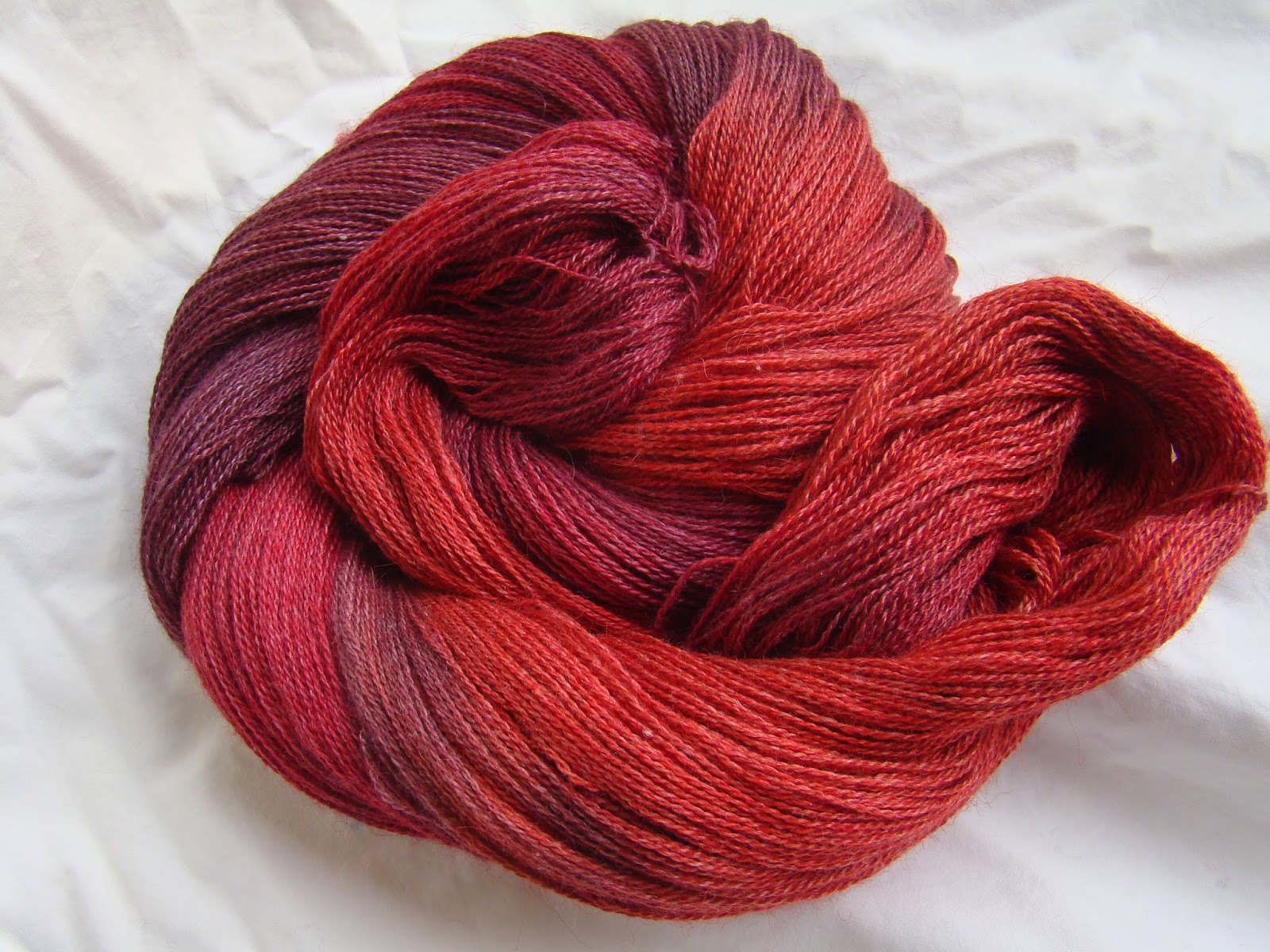 When I am in trouble with my knitting I usually turn to spinning... 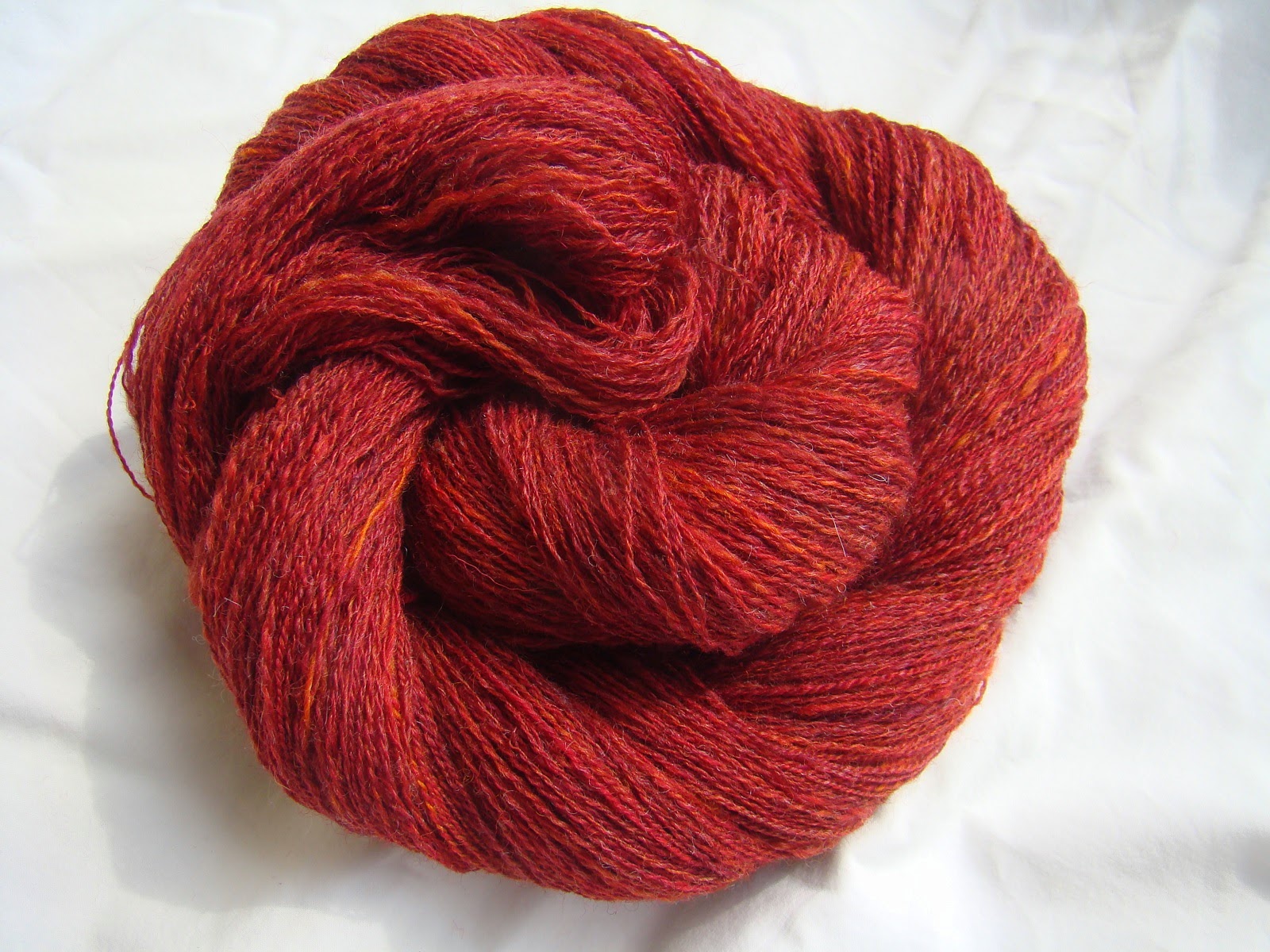 I had three small batts I carded with 8 different shades from dark bordeaux through red to orange... I could have swear I had a picture of them somewhere but I just can't find it...But all through spinning I was echnated how it turned into wonderfully deep color, that showed up the different shades with a really close inspection. 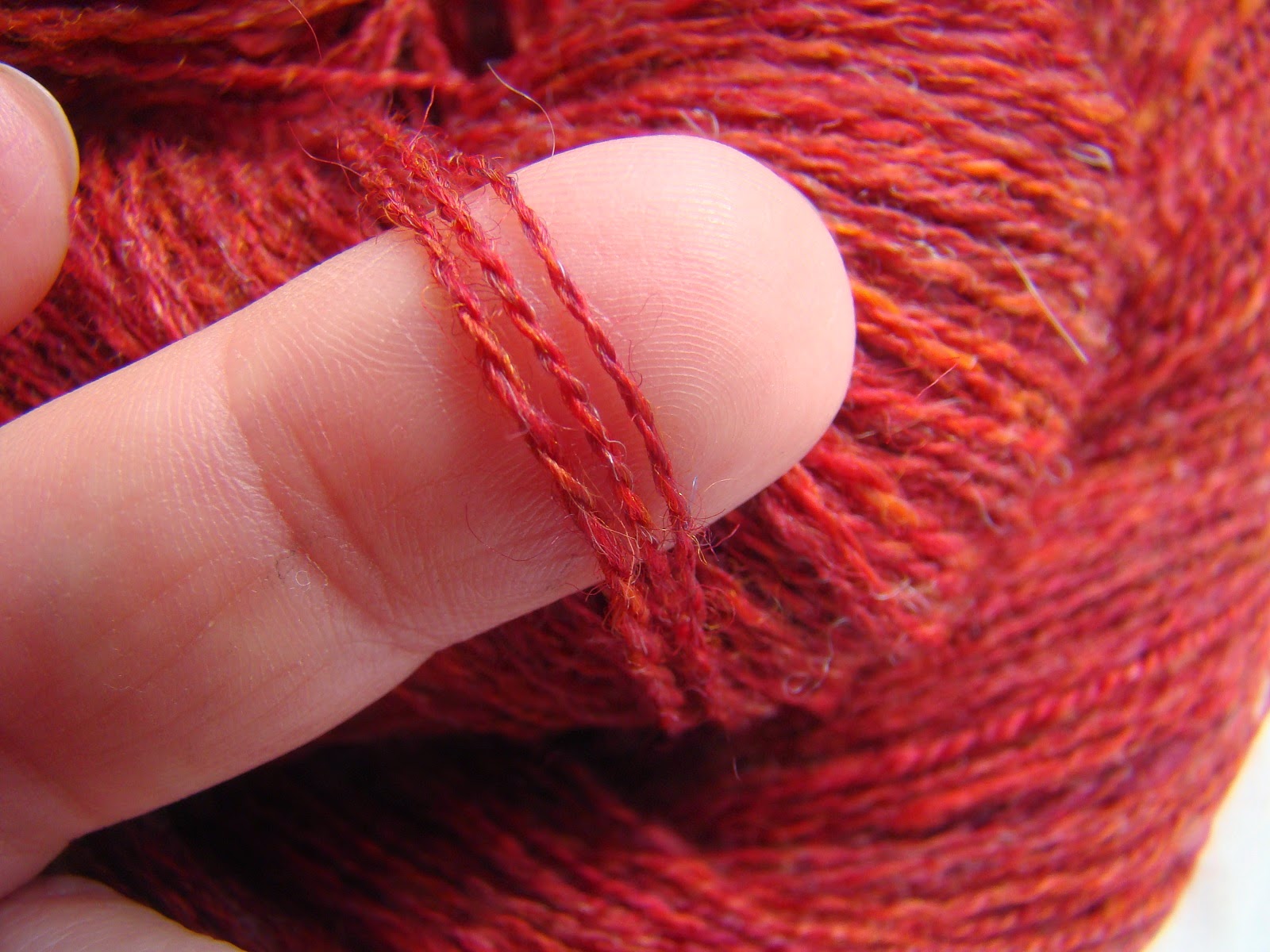 The whole thing turned into 560 meter (90 gramms) of two ply. There are some mistakes in it, but considering how long I've missed, it is fairly OK I guess. maybe enough for smaller a Rock Island. Or who knows. 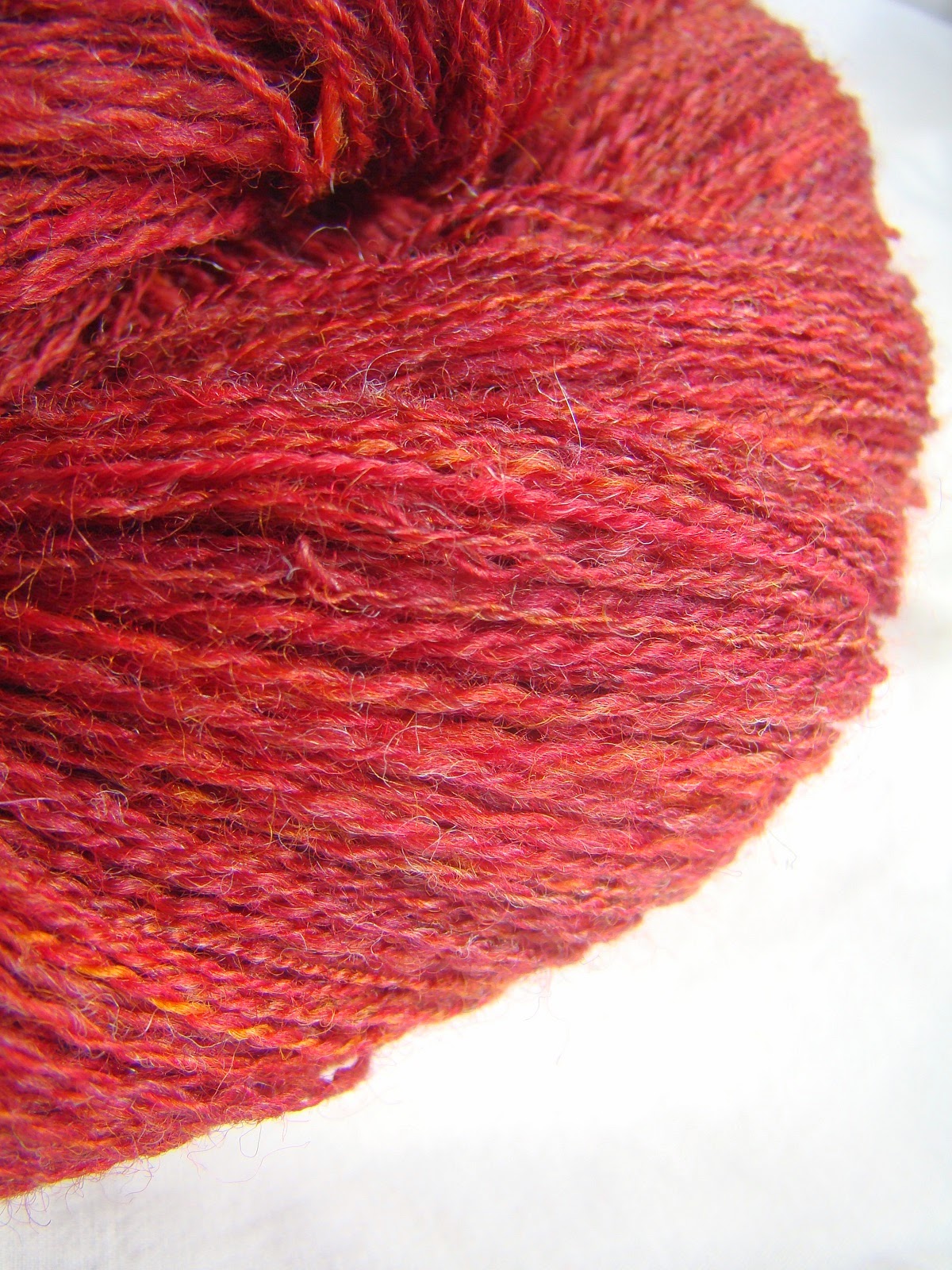 Where should I start? I think I lost the thread (so to speak) sometimes in late March...
University duties became way too much, and my posts became few and far between, when in mid-may I literally put down the needles.
Yes, you've read that right. I have put down the needles.
The truth is that I realized that I had so many exams, so many papers do that it is literally impossible to do it except with the outsmost concentration. "Just a little knitting" would not work, as I know myself, how I am capable of getting lost in a project.
So that was the "sacrifice" I offered to the gods of exams. No knitting. I admit I didn't said no crochet or spinning, but that would have felt like cheating, right?

The exam period was crazy. I was not myself. As I said I have not knitted, have not spun. My classmates saw me wearing black. Twice in a row. Then when my last exam were done, and I thought I could relax, I found ut my opponent did not liked my thesis as much as everybody I've shown it did. In fact he hated it, so I could not just halfheartedly prepare for its defence, but I troughly had to work for it. A lot. But then I did defended it as some said with an unforgettable bravado, but I will spare you the details, if you "talk" to me regurarly, you've heard about it more than enough.
One more admittance test and I thought I am really, really done, when a family crisis, involving a close relation broke out, meaning turning my world over once again, and more stress, more travel, then a lot of hospital visits, now more duties, so crafts got pushed back to the back burner once again...
Add to this some personal conflicts, which were not even real conflicts, but some reactions from people I do not understand, but some of them affecting me pretty deeply, so much, I was actually thinking leaving the whole crafting business behind.

Then somebody said, I would not e able to, after all it wasn't for nothing I've written my thesis on knitting and the Internet community aspect of it...and I had to admit she was right.

I am still not fully comfortable with my crafts (spinning/knitting/ crocehting etc) but there are lights at the end of the tunnel. Or that might be the train coming toward me. We will see.
Tomorrow a spinning post will come. That is for sure (almost).