And drumrolls please, as I promised...here is the finished dress...

First, side by side with the dress that was the inspiration for it... 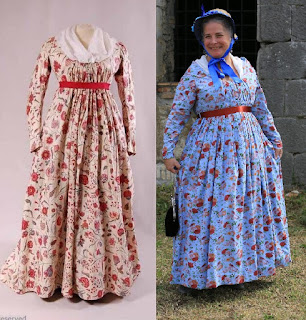 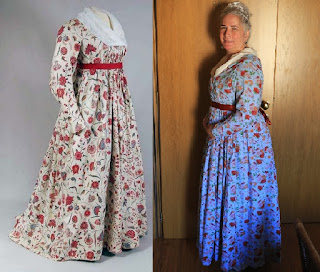 Then a few pictures when it was worn, in September, 2019, in the Italian city, Palmanova... 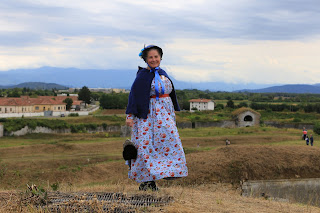 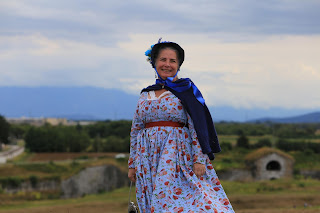 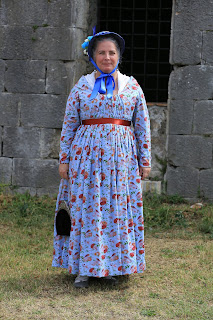 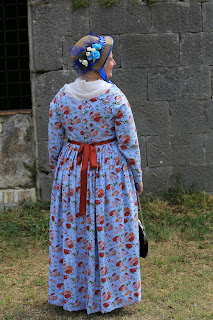 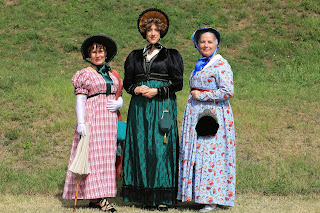 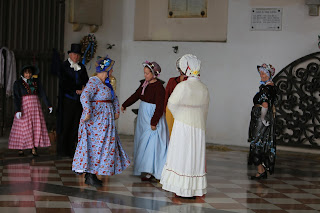 Photoes: Norbert Varga
Posted by peony at 3:30 PM No comments:

Te wall...and the spreadable textile wallpaper and a trip to tesco at 3 AM

(Note: This post has nothing to do with knitting, fiber, or sewing.. not even about me prancing around in pretty clothes. However, it uses cotton fiber, so it might belong here after all. Besides, I think this is just as Crafty, as sewing a historic gown. And it is my life. If you don't care about the wonders of spreadable textile wallpaper, then wait. I will bring pictures of us in pretty clothes in a few days.)

This is how it used to look.. I took this picture about 10 years ago, when I did the ast big rearranging, and clean up in the flat (cleaing up and rearranging Chris's room after he broke his leg was a much smaller affair). This was my sewing room in the last ten years and will be Chris's room. It was N's idea, to lessen the blow of moving into a smaller room, to have that room fixed up. 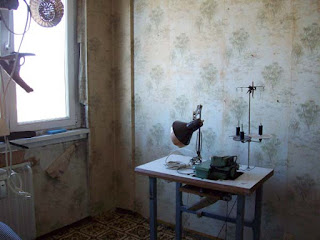 This is how it looks now... What is between the two pictures, aside from ten years? 7 kilograms of spreadable cotton "wallpaper" the foundation paint and two bucket of wallpaint. 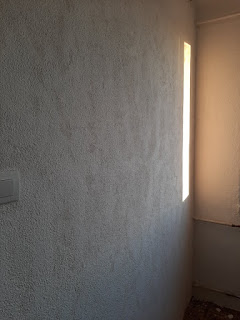 I first heard about this type of wallcovering, when we moved in here, I wanted to try it ever since. What drew me to it, and what I like about it now that I have it on the wall?
It is spreadable, it has to be applied to the wall much like plaster, which means it is a lot thicker than simple wallpaper, and it also means that you can change its thickness, for example I've put it on the external walls somewhat thicker than on the wall toward the kitchen.
It's surface is uneven, rustic, not smooth. This can be a disadvantage for others, I love it. I always loved uneven, rustic wall surfaces,
Because if its thickness, it has heat insulation and soundproofing qualities.
It has a long life (I have heard of people having it on their wall for 15-20 years).
But once it lived its life, it can be reused, simply scrape it off the wall, add some fresh fiber, and glue, and apply again.
It can be colored in the fiber, and/ or it can be painted on the wall. Multiple times. 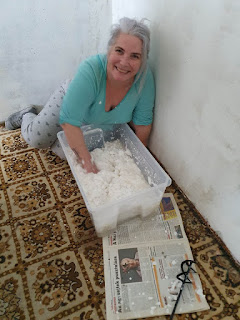 What are its disadvantages? Its application is a finicky, slow work, but this could have been the case because of my inexperience On the other hand, I enjoyed the process of putting it up immensly, even though I never even saw, how wallpaper put on the wall, much less done it myself. 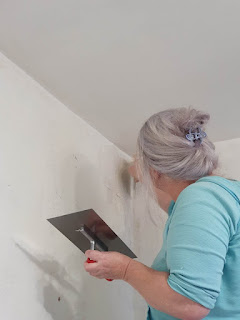 The fiber used for wallpaper (with the glue) is expensive. 2 or even three times as much as a regular wallpaper, It dries very slowly. For days, In the winter drying can take 5-6 days, and it can be easily meassed up while wet. A door opened with a bigger momentum, a not properly calculated turn, and hitting one's elbow to the wall... However these can be fixed pretty easily.
However, there are no big sheets of sticky paper to move around and manoeuver, and at the same time there are no paper"stipes", no joints between the sheets, which I like very much. 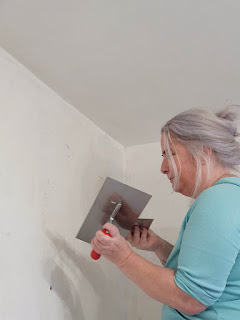 It need VERY CAREFUL preparation of the wall. No, even MORE careful. It is not enough that you have an otherwise smooth concrete wall, it is not enough that you brush the wall, and you spray it with anti-mould liquid and brush it agan. It isn't even enough that you use twice the recomended foundation material, and instead of the prescribed one, you put in on the wall in two layers. The wet fiber covered surface shows everything, really EVERYTHING, even that you cannot see with your naked eye. In this room it might have sucked out the tiny bits of wallpaper glue that was left hidden in the pores of the concrete wall, or the heck knows what, but the fiber put on was white, slowly got yellowed and spotty. As you can see on the above picture that the wall was white and I used the pure white fiber / wallpaper. 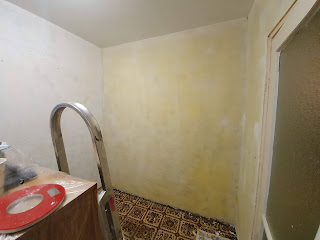 And it if would have been simply yellow... I dislike the color, but there are shades I could have lived with, but this was piss-yellow. And unevenly, spottty-ly so. I really didn't want to scrape it off and start again (besides it is way to expensive to do that), so I used another of its quality, that it can be painted afterwars too. So we bought a bucket of wallpaint and a new painter's roll. (See the difference between the painted -upper left- wall and the rest?) 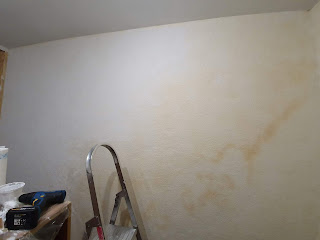 As the nature of things the I've run out paints about 2 AM, when I had the big walls, the major areas painted, there was only a few edges, corners, and the area behind some piping of the heating. N didn't bat an eye, but checked on his phone, wheter the Tessco open 7/24 sells wallpaint... He knows, how much I hate stopping something with so little to the finish line.... 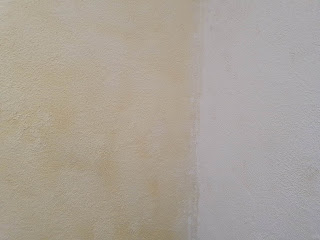 (BTW DO NOT, ever buy the cheap wallpaint in TESCO. Not even if it costs the fraction of the price of the regular paint. I needed it for places where it didn't much matter if I use it in one or three layer, but it dies not covers as much in three layer as the other paint did in one... Just sayin'). 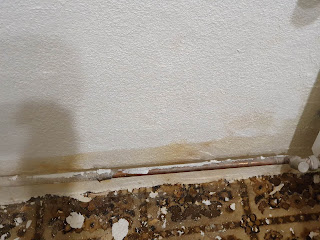 So there was tears and sweat, a lot of both, but I can cross another thing from my bucket-list. 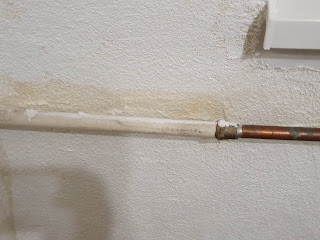 Would I use it again? Time will tell, just how durable, soundproof, and heat insulating it is. If I would have the money, the time and the energy, I would probably start it again, though I would figure out, how to prepare the wall, maybe it needs painting BEFORE the foundation is applied... 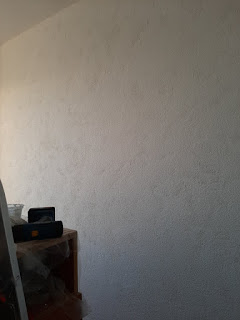 But now it is done, and I quite proud of my work. Yeah, I am hard headed and stubborn, and if I take something in my mind...Only the floor should be done now, but that is not my job... N promised me he would do it this week.
(There is an aricle about this type of wallpaper here - unfortunately I only found a hungarian one)
Posted by peony at 1:00 PM No comments:

Despite my efforst to truly document of making this dress, fightig the pattern took soo much time, that I really needed pull myself together, so I would be ready with the sewing n time, that I didn't really took photos. But rest easy, this is not the last historic dress I made... not even the last regency one. 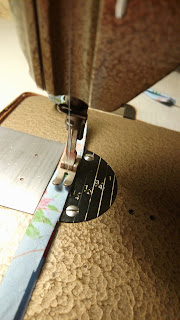 True that 100 % HA dresses from the 1850'is were made by hand... In reenactment, costuming communities everyone can decide just how deeply will immerse him / herself. I am sure there will be peieces on which I will sew each and every stitch by hand... But the day have not arrived just yet. Partly I sew the inner (mainly lengthwise) seams by hand, but also becase I do not yet feel that a hanhandsewn seam can be as stable as the machine one. 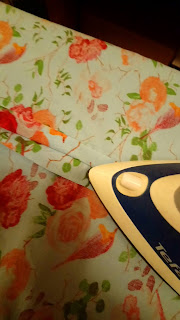 Thirdly, because there are indeed original pieces, that have handsewn seams so straight and even, that no one would tell they are not machine sewn. 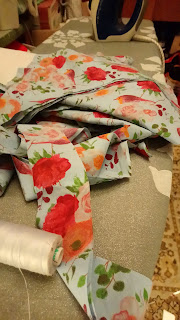 No, I have nothing against handsewing, in fact I use it a lot. In my historic clothes, almost every seam is handstitched down, every linening is handsewn, in my historic dresses (with a very few exception) no machine seam can be seen, not only from the outside, but from the insides as well. 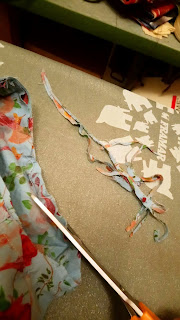 The regency clothes I made earlier had their bodices drawn in, they are from two layers, the upper stayed bigger than the lower, and strategically pulling them they are fitted on each other. Simple.
However the description of the dress I used as an inspiration said that it has pleats on the breast and at the skirt as well. About a dozen of tiny pleats on each side, so they are symmetric as ell. Took me half a day, and several seam ripping. . 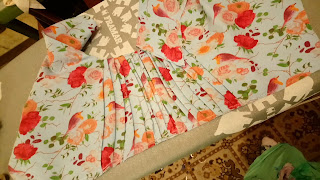 Arranging the plrats of the skirt (not a dozen, but a few times a dozen), though bigger than the bodice's pleats... almost a kid's play, but still took time. 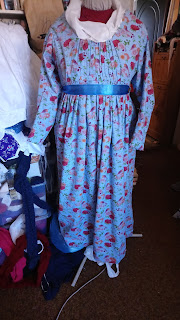 The serious question was whether to use th blue or the red ribbon, but my friends woted for the red (and the orignal piece had a red one too) 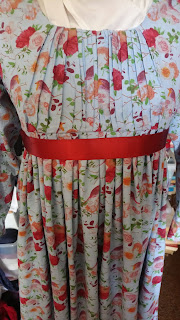 The dress was finished just in time (you could already see it in my previous post, but I will bring pictures from the event I wore it the first time.
Posted by peony at 7:30 AM No comments: