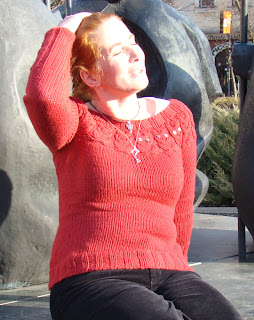 WOW this was fast!
my friend, Angela said that it is lucky to cast on for a sweater fo yourself on new years day...Which is just along my thinking as I always try (if not on the very first day, but the first week) to do something I want to do all year, to bake something, to finish something and to start something new. 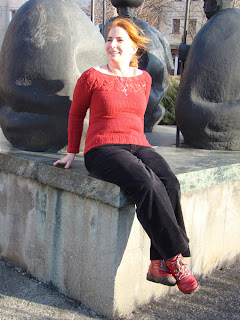 As I keep saying I am not fan of the new years celebrations, so at 10PM I turned my phone off, and went to sleep. Only to be woken up by all the crazy noise, yelling, trumpets, and fireworks at midnight, after which I couldn't fall back asleep.
At times like this I usually work on some knitting, but my current WIP is almost black dark grey, but I just didn't want to start the year with that.
So I thought it is the best time to cast on my "start something new", good luck sweater. As I worked so much with sock, and sportweight yarn I wanted something thicker, something really fast.
This again a yarn that was in my stash for about a year or so, and it was there for a specific purpouse.I remember felling in love with the yarn and the color, and I remember trying to resist it, as it is thicker than I usually knit with... But then I bumped into the pattern for the owl sweater, something I loved for a long time, and realized that it has just about the same gauge...that was he perfect excuse to buy a bagful of it. Which promptly dissapeared in the depth of the stash, as spring was coming and summer and I was looking for thinner knits, and green ones and blue ones and white ones of course.
But it is the middle of the winter now, plenty of time to use a thick, warm sweater (the big auditorium in the University is pretty badly heated)...and the chinese think red is a lucky color. 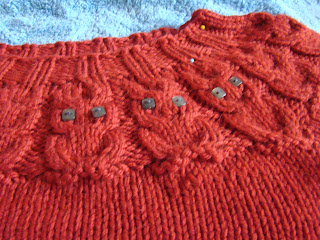 I quickly knitted up a swatch, washed it (and how lucky, I did, but more about on that later). measured, calculated...and cast on around 1.30 AM jan 1sth. 2012.
Using a thick yarn, and needles almost twice as big as I usually knit with... it went really fast. I had the body on the first day, the sleeves on the second, and the yoke on the third. I did the sewing up, weaving ends in, sewing the eyes in an hour or two on the fourth day.
The pattern is Katie Davie's owls. I had it saved and printed it out years ago, when it was still a free pattern.
But if you like it, it is well worth to buy it. It is a well written pattern, a fast one, a fun one. It would be great if you want to knit a first sweater, a first cabled project, or something fast.
I am still me, so as good as the pattern is, I had to do some modifications. First of all did the ribbing longer on the body as well as on the sleeves (on the sleeves I did the ribbing much wider. Don't ask me why, lately I just liek the look of deep ribbing on sleeves), and I moved the waist shaping to the sides.Second, I have a fairly wide back, and strong upper arms (as a leftover from rowing in my teenage years)I added four stitches to the body, and cast off six-six stitches for the underarm seam. Also increased the number of stitches on the sleeves. I had it easy as checking the pattern I knew I would be OK, as long as the total of stitches can be divided by ten. From then I went back to the pattern using the numbers one size bigger than on the body. 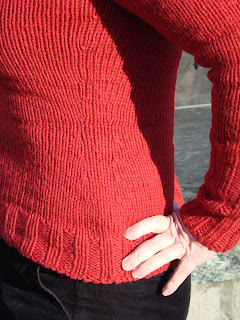 It looked ridicoulusly small, and I could only trust that my swatch is not lying. So many yarns acting so differently, that it would be worth to write a whole post about it. Let it be enough for now, if i wouldn't done the swatch AND would not washed it...I would have been in trouble and would've wasted either my gorgeous yarn, or my precious knitting time. 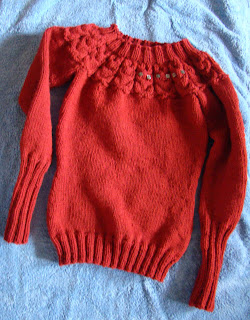 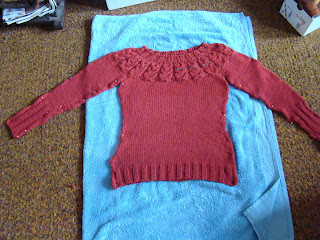 As for the yarn, GGH camello. I heard about this yarn the first time when I bought the magazine last fall with the military jacket inside. I knitted that with something else, because I didn't thought I can get hold of it. It was much to my surprise when I found it in 1001 fonal, and fall in love with the red color as well.
Knitting with it was really fast, but it took a toll on my hand, it was hurting by the third day. It has a lovely stitch definition, and it softens with washing (as well as relaxing quite a bit), but for such an expensive yarn it was surprisingly splitty, and there was plenty of vegetable matter in it. 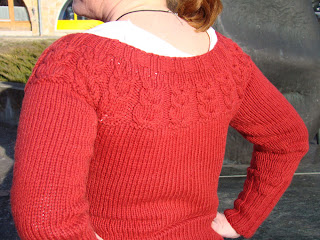 As for bringing good luck... I've written two university exam in two days at the first weekend of the year, wearing this sweater... and I got very good marks on both of them. Now, if this good luck would extend on other areas of my life...
Vera, thanks for shooting the pictures.
Posted by peony at 4:45 PM

my favourite colour range ! great idea to make this as a first project of the new year !

I love Kate's Owl pattern, and yours came out lovely! I finally got around to knitting one last year and have really enjoyed wearing it this winter. I am glad it was able to bring you good luck on your exams! Happy New Year!